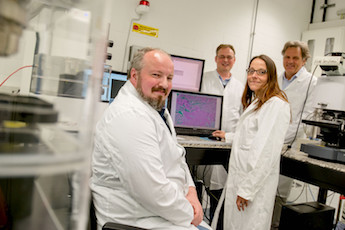 The RUB team applied a QCL source and bespoke aplgorithms

Infrared microscopy, in particular a Fourier transform infrared (FTIR) technique, has been an attractive method for the identification of cancer tissues for several years, thanks to the potential for label-free and automated classification procedures.

However the technique has yet to realize its full clinical potential as a diagnostic tool, partly because of the complex instrumental set-ups involved, and the length of time required to produce results.

A team at Ruhr-University Bochum (RUB) has now developed a new approach to the problem, demonstrating that an infrared microscope based on a quantum cascade laser (QCL) source was able to reduce the time needed to characterize colorectal cancer tissues from one day to a few minutes. The findings were published in Scientific Reports.

"The results of the study give rise to hope that highly precise therapy is within reach, which can be personalized for each individual patient and ultimately prove more successful than traditional approaches," commented Klaus Gerwert of RUB.

The project's fundamental advance was the use of a QCL, a form of semiconductor laser characterized by relatively narrow line width and good wavelength tunability, as the high-power light source, rather than the silicon carbide rod termed a globar that is conventionally employed for FTIR.

In trials using a source from QCL-specialists DRS Daylight Solutions, the new method imaged 120 tissue samples taken from patients suffering from colorectal cancer, using analysis algorithms developed in-house. The results corresponded with traditional histopathology analyses in 97 per cent of cases, according to the project.

New avenues for tissue classification
In its published paper, the team noted that the change to a QCL from a classical black body light source altered the nature of the coherence effects observed during the imaging operation, which had proven a significant hurdle to rapid characterization of tissues in previous scenarios.

"A remarkable advantage of the QCL IR imaging is the gain of speed," noted the team. "Acquiring the conventional FTIR image required 5,400 minutes. In this case the QCL-based IR analyses were approximately 160 times faster for the same measured area. This allows us to analyze a much larger number of patients in a much shorter time period."

The paper calculates that it would previously have taken more than one year to gather the data for the RUB study using conventional FTIR methods, but using QCL imaging allowed all the necessary spectral data sets to be collected in about 100 hours.

The new project was also able to exploit previous work at RUB on an automated and label-free approach to detecting tumor tissue in a biopsy or tissue sample, a combination of modified workflows and bespoke algorithms which had already proved able to identify the five biomarkers used to diagnose subtypes of mesothelioma in patients.

“The method is now very fast, reliable, and does not depend on a specific device or a specific user,” said Angela Kallenbach-Thieltges of RUB. “This opens up new avenues for automated classification of tissue samples taken directly from the patient.”