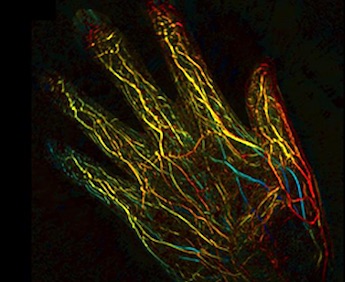 Under the skin: mapping blood supply

PACT, of which Wang has been one of the key pioneers, employs a non-ionizing laser pulse to briefly heat up an absorbing target for a short instant of time before allowing it to cool, causing an expansion that in turn creates an ultrasound signal. That signal can then be reconstructed to generate an image showing the distribution of optical absorption inside the target.

Hemoglobin in the blood has proven to be particularly suitable as a chromophore in PACT procedures, making it an attractive technique for accurately visualizing the location and extent of blood vessels in different parts of the body. However, one long-standing challenge has been the relatively long time periods needed to capture an image, due to the inherently low strength of the photoacoustic signals.

Wang's group designed a PACT architecture specifically to maximize the signal information extracted from a tissue sample, and do so in a short a time period as possible. The research was published in Journal of Biomedical Optics.

Tests showed that the PACT system was able to reconstruct the blood vessels of the human hand and forearm, imaging vasculature up to 1.8 cm deep in all directions and highlighting the potential value of the technique for deep imaging without an external contrast agent. Further examinations of the feet, the legs and the biceps of subjects confirmed the findings.

Crucially, the data for full volumetric images could be collected within 5 to 15 seconds, and each tomographic slice acquired in 100 microseconds, removing the potential complication of movement effects caused by heartbeat or breathing. This could be useful in diagnosing potential blockages in the blood vessels, since the motion of the vessels will be altered in the vicinity of the obstruction.

"By repeatedly imaging a single plane in the volunteer’s wrist, we monitored the vessel wall of a pulsating artery at a frame rate of 10 HZ, and showed that the pulsation is centered at the heart beat frequency," commented the team in its published paper. "Comparing this motion to a neighboring stationary vessel, it can be verified that PACT is capable of tracking vessel movement with high contrast. This high imaging speed could help physicians localize and characterize arterial obstructions."

Other possible applications of an optimized PACT platform could include screening for issues related to diabetes, providing postoperative surveillance for procedures such as revascularization surgery, and monitoring responses to drug therapy.

Wang's project team did note that PACT's penetration depth can be sensitive to skin color, since melanosome is the dominant optical absorber in most of the visible and NIR electromagnetic spectrum. But the potential impact of the technique on patients with skin coloration suited to the technique could be considerable.

"The work shows that PACT could be a noninvasive method for providing strong contrast angiographic images of human extremities with high spatiotemporal resolutions," noted the team. "This suggests that it could provide a useful modality for detecting vascular disease and monitoring vascular health."