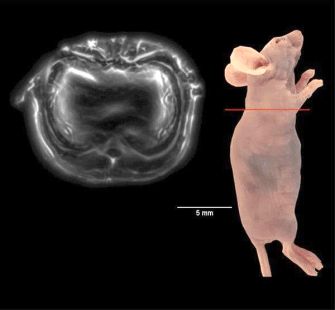 Optical imaging deep inside the bodies of live small animals remains challenging, not least because of the significant scattering experienced by the imaging photons as they travel through the tissues of interest.

Photoacoustic (PA) tomography provides a solution, using a laser to generate an ultrasonic rather than an optical signal from chromophores within cells under illumination. Since this suffers a much lower degree of scattering when passing through soft tissue than photons do, it can be used in combination with computational algorithms to generate tomographic images at greater depths than fluorescence techniques can achieve.

Current photoacoustic computed tomography (PACT) methods have achieved imaging at tissue depths beyond 10 mm, but a new variant of the technique developed by Duke University and Caltech has increased that figure and achieved in vivo whole-body imaging of small animals in real time, obtaining clear sub-organ anatomical and functional details. The work, published in Nature Biomedical Engineering, could be of value in assessing drug treatments or tracking the course of cancer.

"With this advance, researchers can easily watch as drugs are distributed throughout an animal and track how different organs respond," said Junjie Yao of Duke University.

The technique, christened single-impulse panoramic PACT (SIP-PACT), puts the subject animal within a full-ring detector consisting of 512 ultrasonic transducer elements, and illuminates it with a single laser pulse short enough to be treated as a single impulse.

Similar ring-based detector arrays have been developed in the past, including work by PACT-pioneer Lihong Wang, now at Caltech. But the project team indicates in its paper that it has tackled some of the technique's outstanding problems in high-performance small-animal whole-body imaging, and the requirement for simultaneous high resolution, deep penetration, multiple contrasts, full-view fidelity and high detection sensitivity in one system.

Tracking cancer cells
Two different illumination approaches were applied in the project, one shining a 1064-nanometer laser onto the top of a mouse's head to study the brain cortex, exploiting PACT's ability to distinguish between oxygenated and deoxygenated hemoglobin. The other used a suitable lens and condenser to illuminate a ring around a subject animal's trunk, imaging blood dynamics in topographic slices through the body.

In combination with specially designed computational methods to counter the inherent inhomogeneity of the target area, the second technique successfully imaged the full 48-mm cross-section of a rat 50 times per second, providing detailed movies of its inner workings at 120-micron resolution. A 50 Hz frame rate was rapid enough to allow real-time functional examination of the animal, capturing its respiratory movement and heartbeats.

In the published paper, the team indicate that this is thought to be the first time that photoacoustics has revealed the dynamics of whole-body oxygenation distribution across internal organs and imaged it in great detail, in vivo and without labeling.

Lihong Wang, a collaborator on the new paper, commented that "this penetration range enables functional imaging of whole bodies of small animals. It is expected to enable all kinds of biological studies in small animals and to accelerate drug discovery."

One significant use for the technique may be to monitor the movement of circulating tumor cells (CTCs) - cells shed from an existing tumor and circulating in the blood stream, thought to be a key mechanism in most cases of spreading cancer.

The project used its SIP-PACT system to monitor melanoma migration in a mouse's cortical vasculature, using a 680-nm laser and exploiting the much stronger optical absorption of melanin at that wavelength compared to hemoglobin. Having introduced the melanoma cells by injection, the team was able to follow the CTC's movement through both cortical arteries and veins, and also observe occasions when the cells stopped moving - potentially a sign of the "homing" of metastasizing cancer cells to a site of future growth.

"The SIP-PACT approach is especially powerful because it does not rely on the injection of any type of contrast agent," said Yao. "You can be sure that changes are not caused by foreign variables. We think that this technology holds great potential for both pre-clinical imaging and clinical translation."