Swedish bio-printing pioneer says it will gain a ‘leg up’ on competition with cash-plus-stock deal worth up to €50M. 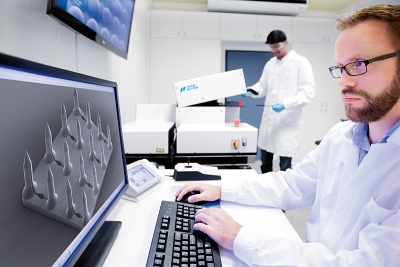 Nanoscribe, the spin-out from the Karlsruhe Institute of Technology (KIT) that developed two-photon polymerization tools to make tiny, intricate structures, is set to become part of the fast-growing Swedish life sciences firm Cellink.

The two firms have agreed a cash-plus-stock deal that will see Cellink pay an initial €34 million for Nanoscribe, plus up to an additional €16 million in earn-outs if financial targets are met.

Assuming that the acquisition proceeds as expected, Nanoscribe will join forces with several other recent purchases made by Cellink, as the firm looks to build a portfolio of cutting-edge technologies that it believes will revolutionize biology and healthcare.

“The life science industry is currently going through a very exciting transformation where many processes and technologies are being miniaturized to increase throughput and reduce cost, where price of reagents is a major bottleneck for sequencing,” said Cellink.

“One example is the sample preparation steps for single-cell genomics applications. With Nanoscribe’s technology, we stay competitive in this transformation and this enables us to miniaturize devices for a wide range of applications.”

Printing vascular micro-environments
More specifically, Cellink says that the acquisition will make it the only company in the life sciences industry with internal two-photon polymerization (“2PP”) additive manufacturing capability, providing it with a “leg up” on competition.

That capability is expected to contribute to the wider company’s product development efforts, yielding additional recurring revenues through the fabrication of implants, microneedles, microporous membranes, and other consumables used in what it calls “omics” applications.

One key area looks to be structural bioprinting, where Nanoscribe's ultrafast laser-based tools can be used to produce more realistic tissue architecture, including vascularization.

Cellink’s CEO Erik Gatenholm said in a company release: “With Nanoscribe’s 2PP technology, we will complement our product portfolio and offer a wider range of products to our amazing customers. We are combining our strong, purpose-driven growth agenda with trailblazing bio-converging technologies for the sake of improving health all around the world.”

Martin Hermatschweiler, who co-founded Nanoscribe with KIT scientists and PhD students back in 2007, added:

“We take pride in our state-of-the-art 2PP technology, offering our customers the tools to materialize their ground-breaking ideas. We very much look forward to join the Cellink Group and together explore the possibilities with the 2PP technique and deliver on the Group’s vision to create the future of medicine.”

Zeiss connection
Since it was founded Nanoscribe has caught the attention of the photonics industry through a series of eye-catching applications of the 2PP approach, producing tiny polymer replicas of the Statue of Liberty, the Eiffel Tower, the Empire State Building, and the Brandenburg Gate.

At the SPIE Photonics West technology exhibition in 2013, the company reported a 100-fold increase in the speed of its nano-printing tools - thanks to the incorporation of high-precision galvanometers - and highlighted the advance with a video showing a fictional “Hellcat” spaceship that could be produced in less than one minute.

One of Nanoscribe’s early investors was the optics giant Zeiss, and the two companies extended that relationship in 2018 via a €30 million investment at KIT’s startup and innovation campus that now serves as Nanoscribe’s headquarters.

In 2014 that tool’s predecessor won a Photonics Prism Award in the “advanced manufacturing” category.

Last month Nanoscribe revealed that it was a partner in the EU-funded photonic computing project called “PHOENICS”. The four-year project brings together world leaders in the emerging area of neuromorphic photonic computing, aiming to achieve energy-efficient peta-scale processing power with ultra-high bandwidth.