French high-tech firm acquires compatriots Kylia and Muquans as it looks to build its profile in the photonics sector. 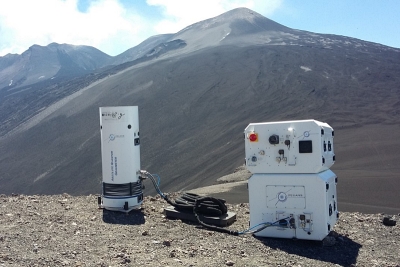 iXblue, the high-tech company headquartered in the suburbs of Paris, is expanding its photonics activities with the twin acquisitions of optical component maker Kylia, and quantum sensing pioneer Muquans.

Founded in 2000, iXblue now has nine industrial sites across France. Its photonics activities focus on applications in space, sensing and metrology - a fiber-optic dosimeter from the company is currently monitoring radiation on board the International Space Station.

iXblue says that the new additions will see it employ more than 160 people across its photonics unit, spread over four industrial sites. That activity should generate a turnover of more than €35 million in instruments, lasers and advanced photonics components.

Etna monitoring
Kylia, founded in 2003 and based in the photonics-rich Bordeaux area, develops and manufactures optical components and instruments based on ultra-precise assembly technology.

Its products - including micro interferometers, optical switches, and collimator arrays - are typically used by industrial companies in optical communications, metrology, and space applications.

Muquans, founded in 2011 and also located around Bordeaux Talence, is one of the first companies in Europe to develop commercial quantum sensing instruments based on laser-cooled atoms.

Among its products is a quantum gravimeter that has already been deployed close to the summit of Mount Etna (see image above), to help researchers monitor seismic activity. Muquans also offers atomic clocks, frequency transfer systems over fiber, and high-performance laser systems.

The Muquans gravimeter relies on a frequency-doubled 1560 nm laser that is used to cool rubidium atoms close to absolute zero for measuring gravity with atom interferometry.

Central to the system design is a pyramidal retroreflector optical component that generates six beams from one source - thus greatly simplifying the optical setup.

The company is also working on a marine version of its quantum gravimeter for use by the French Navy, as part of a project with the French aerospace laboratory ONERA that is expected to provide four units.

Ultimate metrology
Commenting on the acquisitions, iXblue’s CEO Fabien Napolitano said: "This merger is a concrete expression of iXblue's strategy to position itself even more strongly in the photonics market and to become a major player.

“The combination of iXblue with Kylia and Muquans will enable new synergies to arise from the extraordinary variety of technologies that will be at the core of our offering in this field.

“It also allows iXblue to be active in the New Aquitaine region, at the heart of a rich ecosystem around lasers and optics.”

According to Ludovic Fulop, the CEO of Kylia, the move represents a “unique opportunity” for the firm to accelerate its international development.

“It is the result of a common history and a journey during which the teams have crossed paths to develop complementary, active and fruitful collaborations, particularly in the space market,” he said.

Muquans CEO Bruno Desruelle added: “We have discovered that there are countless bridges between the world of photonics, iXblue's fiber-optic inertial systems, and Muquans' gravimeters, laser sources, and atomic clocks.

“This union is one of the results of iXblue's presence at the Institut d'Optique d'Aquitaine. This proximity on this site for more than five years has been, in a logical way, the opportunity to share a common vision of the potential of cold atom quantum sensors for ultimate metrology.”