3D laser nanoprinting is now 100 times faster, thanks to high-precision galvanometers in the latest Nanoscribe machine.

Nanoscribe, the Karlsruhe, Germany, spin-out company that is developing equipment for production of nano-scale polymer components, revealed a quantum leap in the technology at the BiOS and Photonics West exhibition in California last week.

The company’s new Photonic Professional GT system, shown off for the very first time inside the Moscone South Hall in San Francisco, now incorporates ultra-high precision galvanometers that have increased the speed at which polymer nanostructures can be fabricated by two orders of magnitude.

CEO Martin Hermatschweiler told optics.org that existing customers can buy the new technology in the form of an upgrade, and is expecting the first deliveries of the system to take place in the third quarter of 2013.

High speed; high resolution
The table-top system now offers what is claimed to be the highest-resolution of any commercially available 3D printer. Hermatschweiler said that it had produced a sub-micron-scale replica of a Hellcat jet spaceship (see embedded video, above: video gamers of a certain vintage may recognize the design from the popular 1990s game Wing Commander) in less than a minute. Previously, it would have taken hours.

Other eye-catching replicas made by the same machine include the Statue of Liberty, the Eiffel Tower, the Empire State Building and the Brandenburg Gate.

The novel lithography technique uses two-photon polymerization, with the photons provided by an ultrafast fiber laser. It is not yet being used for industrial applications, but research laboratories are expected to use the kit to make novel devices for micro-optics, biological cell scaffolds and in microfluidics. 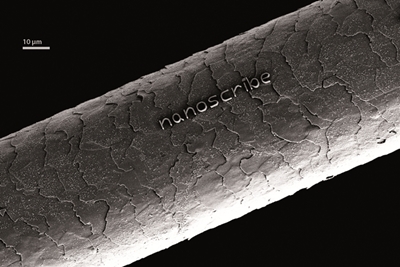 Hermatschweiler says: ”We are revolutionizing 3D printing on the micrometer scale: The demands for precision and speed at the same time are met by industrially established galvo scanners - a quantum leap in nanofabrication.”

“Our product benefits from more than one decade of experience in photonics, the key technology of the 21st century. Our 3D printers were already unrivaled in precision and resolution, user-friendliness, and compactness. Now they also stand out due to their enormous speed.”

Optics giant Carl Zeiss retains a 40% stake in Nanoscribe, which was spun off from the Karlsruhe Institute of Technology back in 2007.