A vein viewing system, a MEMS spectrometer and a terahertz scanner feature among the shortlisted entries. 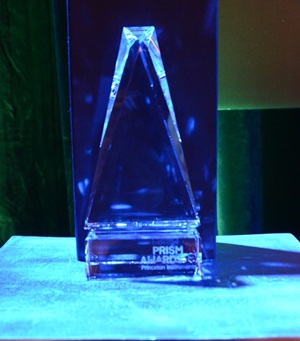 Organizers SPIE and Photonics Media have announced the finalists for the 2014 Prism Awards, with frequency-doubled green lasers, optical tweezers and hand-held diagnostic devices among the short-listed technologies.

The awards, which will be presented at the forthcoming SPIE Photonics West conference and trade show, are designed to showcase advances in photonics technology and its application.

As in previous years, the entries have been whittled down to three finalists in each of nine categories. This year sees one entry – a MEMS-based infrared spectrometer from Si-ware Systems – named in two separate categories, and Germany’s Hubner short-listed for two different products, meaning that 25 companies are represented overall.

Started up a decade ago, Si-ware Systems is based in the Egyptian capital Cairo. Earlier this year, the fabless company licensed its MEMS-based Fourier transform infrared (FT-IR) spectrometer – claimed to be the world’s first single-chip spectrometer – to Japan’s Hamamatsu Photonics.

The device, nominated for awards in both the “optics and optical components” and “test, measurement and metrology” categories, was the first product to be developed on Si-ware’s silicon integrated micro-optical system technology (SiMOST) platform.

According to the company, this approach allows for alignment-free optics. So whereas discrete optical systems normally have to go through costly and time-consuming precision alignment procedures, with SiMOST the optical components are aligned lithographically on-chip, yielding dramatic savings.

Nano-tweezers versus vein imaging
The “life sciences and biophotonics” category sees an optical diagnostic reader from Holomic – the start-up company that span out of work by Aydogan Ozcan’s research group at UCLA – go up against an optical nano-tweezer system from Philadelphia-based Optofluidics and a system for viewing veins developed by the medical imaging company AccuVein.

In the “advanced manufacturing” category, the Photonic Professional GT from Nanoscribe – a nanoprinting lithography system that was launched at Photonics West earlier this year – makes the short list. Also nominated in that category are a beam-waist analyser from Haas Laser Technologies and Germany-based Innolite’s ultra-precision “ILCENTRIC” diamond turning tool for lathe centering of mounted lenses.

In a change from recent years, the 2014 Prism Awards will not feature a “green photonics” category. In its place, the event sees the return of the “other light sources” category, which features frequency-converted green lasers from both Necsel and Fujitsu-backed QD Laser from Japan, alongside an LED-based white-light source for fluorescence microscopy developed by UK-based CoolLED.

Winners will be announced at a gala dinner taking place during next February’s Photonics West event – at which many of the finalists are also exhibiting. For full details, visit the 2014 Prism Awards web site. The full list of finalists and their respective categories is as follows: