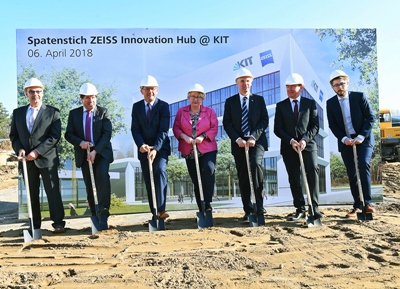 Groundbreaking at the KIT innovation hub

Germany-headquartered optics giant Zeiss has broken ground on its new innovation and startup campus in Karlsruhe, a 12,000 m2 site dedicated to technology transfer.

Described as a “new space for carve-outs and greater collaboration between business and academia”, the €30 million center is being built at the Karlsruhe Institute of Technology (KIT), and will also become the new headquarters for the high-precision lithography equipment company – and KIT spin-out - Nanoscribe.

Zeiss will also move into the new building, with Kaschke saying: “We aim to use the Zeiss Innovation Hub @ KIT [sic] to expand our more than ten-year partnership with KIT and benefit from the potential of one of Germany’s most innovative sites, here on the north campus.”

The CEO added: “We want to offer creative, bright, technologically minded graduates room to develop their ideas and projects and take advantage of career prospects at Zeiss.”

Enterprising KIT staff and students are expected to rent spaces in the new building to nurture startup activity, with Hanselka commenting that the hub would bolster innovation at KIT and intensify close collaboration with the private sector.

“The Hub offers our carve-outs the space to quickly turn their innovative ideas and current research findings into market-ready products that benefit both society and businesses,” he said. “At the same time, it offers our graduates exciting prospects. The strategic partnership between Zeiss and KIT is the expansion of a longstanding collaboration.”

Global expansion
Bauer said during the groundbreaking ceremony: “This is a clear signal for the transfer of knowledge and technology in Baden-Württemberg - Zeiss and KIT are addressing the topics of technology transfer and startup culture. This is a place where not only keen founders receive support, but also where curious individuals are encouraged to try to make it on their own.”

The minister added that the Karlsruhe region, and KIT in particular, represents an excellent site for the new hub. Nanoscribe – which in 2014 won a Prism Award for its development of a 3D laser lithography system - is itself one of KIT’s successful ventures.

“Zeiss was one of its stakeholders virtually from the very beginning,” stated Zeiss of Nanoscribe. “The company will thus be getting the space it so urgently needs for its further expansion.”

With an area covering 12,000 m2, the hub will be able to host office space, meeting areas, laboratories, and production facilities. As well as investing approximately €30 million, Zeiss says it will cover construction and operating costs.

The Jena-headquartered firm added that the Karlsruhe development was just one of a series of expansion projects now in progress. Among them are a joint venture with lithography giant ASML to develop future generations of reflective optics for extreme ultraviolet (EUV) lithography, intended to extend the rule of Moore’s law over the next decade and beyond.