WaveOptics snapped up in $500M deal

UK-based maker of augmented reality waveguides based on diffraction gratings to become part of Snap Inc., the software firm behind popular Snapchat app. 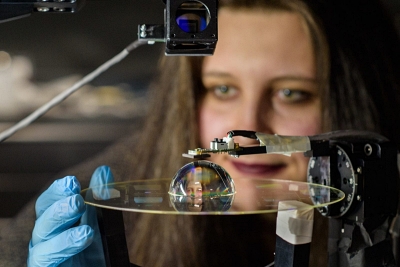 Snap Inc., the NYSE-listed software company behind photo messaging app Snapchat, is to acquire UK-based WaveOptics in a deal reportedly worth more than $500 million.

The deal marks Snap’s first foray into manufacturing, as the Santa Monica firm has - until now - outsourced production of its own AR glasses to various partners.

Commenting on the acquisition in an interview with US television channel CNBC (see below), Snap’s CEO Evan Spiegel said: “We’ve been working with [WaveOptics] for many years on waveguides. These are really sophisticated and complex components.”

Pointing out the complexities involved in improving key aspects like increasing the field of view and brightness of AR glasses while reducing power consumption and weight, Spiegel added:

“This really represents a long-term investment in the future of Spectacles. [WaveOptics] brings years and years of development to the table.”

WaveOptics subsequently confirmed the development on its social media channels, saying it was “excited about this new chapter” under Snap ownership.

Large eye-box
Founded by Sumanta Talukdar and David Grey in 2014, WaveOptics has developed AR lenses and light projectors based around diffractive waveguides.

By using only two distinct diffraction regions - an input grating where light from the light engine is first coupled into the waveguide, and an output structure consisting of a 2D array of nanostructures - the WaveOptics approach shrinks the overall weight and size of AR glasses.

Most conventional designs require three gratings, whereas the WaveOptics approach means that its output structure can be larger - with wearers benefitting from a larger “eye box”, the technical term for the region in front of the eye in which a viewable image is formed.

“With a large eye-box and a wide field of view, WaveOptics’ diffractive waveguides seamlessly combine real and virtual worlds,” states the firm. “Crisp text and imagery is projected by our near-eye displays, presenting computer images which overlay the real world.”

Known as 2D pupil expansion, the technology is also able to accommodate the varying head sizes and eye separations of different individuals.

Key partners
In the development of those components, WaveOptics has collaborated closely with major glass firms Corning and Schott, who produce the high-index glass material on which the company’s AR waveguides are based.

WaveOptics has said previously that the flatness, refractive index, and parallelism of the waveguide glass produced by Corning are all crucial for ensuring image quality with low scatter and high contrast.

Earlier this year WaveOptics said it had teamed up with 3D-printed optics specialist Luxexcel to create augmented reality (AR) glasses that can be tailored to an individual’s eyesight prescription.

The two firms then revealed a module showing off the technology at SPIE’s AR/VR/MR Digital Forum event in March. “The module enables technology companies to manufacture AR prescription eyewear in a normal form factor similar to today’s conventional eyewear,” said WaveOptics and Luxexcel.

VC payout
While financial details of the Snap deal are yet to be released, the sums of money involved suggest that the venture capitalists who backed WaveOptics in a $39 million series C round of funding in 2019 are set to make a substantial return on their investment.

Last month Snap posted a sharp increase in sales for its latest quarter, with revenues of nearly $770 million. However, it continues to rack up substantial losses - the company has posted a net loss in the region of $1 billion in each of its three most recent fiscal years.

That hasn't stopped the company's stock-price valuation surging: Snap Inc has more than trebled in value over the past 12 months, and now has a market capitalization approaching $100 billion.

The company has also arranged $1 billion in new interest-free finance with Goldman Sachs and JP Morgan recently, helping to give it the ability to acquire the WaveOptics operation.