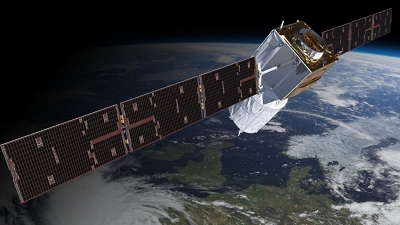 Teledyne e2v, the UK-based developer of light sensors, is to work on a “next-generation” detector for a potential follow-up to the European Space Agency’s groundbreaking Aeolus satellite mission.

Launched in 2018 after serious delays, Aeolus uses a frequency-tripled Nd:YAG laser at the heart of a Doppler lidar instrument to measure atmospheric wind speeds - and is the first apparatus of its kind to be deployed in space.

That Aeolus data is now being used to improve the accuracy of weather forecasts and climate modeling - with the UK’s Met Office among those now able to use the data just 3 hours after it is collected.

However, the optical hardware still has certain limitations, and ESA and EUMETSAT (European Organisation for the Exploitation of Meteorological Satellites) are now looking at a possible follow-up mission that could further improve performance.

CCD69 sensor
As part of that preliminary effort, Teledyne says it has been contracted by ESA to develop an improved version of the “CCD69” detector on board Aeolus.

A 16x16 pixel CCD sensor with a novel charge storage region, the CCD69 detector is able to measure the distance of the returned UV laser pulse to resolve the altitude of aerosols in the atmosphere, and the Doppler shift that equates to the wind speed at each altitude.

This technique is also able to identify thin aerosol and cloud layers, and the altitude of the top of thick clouds.

“Utilizing the experience and data available from the ESA Aeolus mission, hosting the first Doppler Wind Lidar in space, Teledyne e2v will further enhance the performance and sensitivity of the ultraviolet detector that could ultimately be deployed in the next-generation space-based Doppler Wind Lidar instruments,” said the Chelmsford firm, which is part of the wider Teledyne Imaging company.

According to Anne Grete Straume-Linder, Aeolus mission scientist at ESA, the wind observations performed by Aeolus have had a significant positive impact on weather forecasts and are now used by several different weather centers.

“We’ve seen a particularly large impact in the upper troposphere and lower stratosphere, so between 10 km and 30 km [altitude], where you have very few observations,” Straume-Linder pointed out, adding that Aeolus was also filling data gaps in the tropics, southern hemisphere, and polar regions.

Among the limitations of the current satellite system are the typically very weak returned laser signal. During her presentation at the Appleton event, Straume-Linder also highlighted difficulties with optical aberrations resulting from temperature variabilities and mirror performance.

“The biggest challenge has been the flight lasers,” Straume-Linder reported, adding that the back-up source deployed after the first laser had suffered a drop in energy levels had performed very well.

Biases in wind measurements have also resulted from temperature fluctuations across the large (1.5 m diameter) telescope used to collect the weak laser signals - although that issue has now been corrected by the mission’s ground operations.

While the specific details of any follow-up mission are yet to be decided, increasing the level of the atmospheric signal detected is a primary objective - and one for which an improved light sensor would be critical.

Teledyne e2v’s chief engineer, Paul Jerram, commented: “We are proud that unique technology from Teledyne e2v is at the heart of a mission that is improving the quality of weather forecasts around the world and excited to be developing the next-generation detector that will produce even better quality, higher resolution data that will provide further improvement to climate science.”