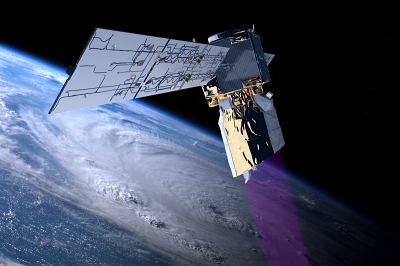 Launched by the European Space Agency (ESA) in August 2018, the Aeolus payload is based around a pulsed ultraviolet laser called “Aladin” - a frequency-tripled Nd:YAG source operating at 355 nm.

From its polar low-Earth orbit, the instrument detects back-scattered ultraviolet photons at slightly shifted wavelengths, to provide the very first direct measurements of wind speeds from space with Doppler lidar.

The idea is to provide forecasters with accurate global wind speed data in the lowermost 30 km of the atmosphere, who will incorporate the information in their models to improve everything from daily weather reports to long-range climate studies.

However, the project has been beset by problems. Degradation of laser optics led to a ten-year delay launching Aeolus in the first place, and although those technical difficulties were solved, the on-board laser used initially following launch had to be switched after less than a year in operation after its pulse energy output dropped.

Collision avoidance
ESA said in July last year that switching to the back-up laser solved that issue, although within a couple of months the agency had to perform a “collision avoidance” sequence to take Aeolus off of a collision course with one of SpaceX’s “Starlink” mini-satellites.

Now, it seems that data from the satellite is being put to use. ESA announced in a statement: “After months of careful testing these measurements are considered so good that the ECMWF is now using them in their forecasts.”

The agency’s mission manager Tommaso Parrinello added: “While we did find that we had to switch to the instrument’s second laser transmitter to boost power, the mission is proving to be an excellent way of measuring the wind – so much so that we now see data being assimilated into forecasts, which we are absolutely thrilled about.”

ECMWF itself said that the second laser, in operation since June 2019, has so far been found to deliver more stable power at sufficiently high intensity, with “clear improvements” to medium-range forecasts (specified as 3-10 days ahead) when the lidar data is assimilated.

Michael Rennie, an ECMWF scientist working on the Aeolus program, explained in an ESA release: “We had to assess the impact that Aeolus would have on the weather forecasts before deciding to ingest them operationally – and this involved checking the data quality with the forecast and other observations, and running a host of experiments to see if Aeolus consistently improves the forecasts, and by how much.

“Our experiments showed that, indeed, Aeolus had a positive impact, and this makes a big difference, particularly over parts of the world where there is a lack of other wind observations.

“The biggest improvement is in tropical regions and in the southern hemisphere. We also see that measurements from Aeolus are among the most important instruments in space for forecast quality, which is hugely impressive considering that Aeolus actually gives us less than 1 per cent of the measurements we use in daily forecasts.”

Future lidar fleet?
With that key milestone now reached, the path is clear for more weather centers to start using the data during the course of 2020.

ESA and ECMWF note that Rennie and others have had to calculate some complex biases in the Aeolus data - partly a result of the optical components on board the satellite.

“Patient scientific detective work carried out by [Rennie], in collaboration with other scientists, has shown that Aeolus biases are closely correlated with small variations in the temperature distribution across the large mirror used in the Aeolus instrument’s telescope,” pointed out ECMWF.

“This finding will enable us to refine our bias correction, since those temperatures are measured in space and available in real time,” Rennie added.

“Aeolus engineers and scientists are now investigating why such temperature differences cause large wind biases, and if the mirror temperatures can be controlled better. A better understanding will be very valuable when designing and building a potential follow-on Aeolus instrument.”

ESA says that the positive development could result in a future “fleet” of similar Doppler lidar satellites being deployed.