After a decade battling problems with high-power lasers and UV coatings, the wind monitoring mission should finally launch in November 2017. 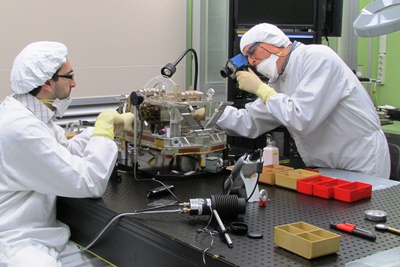 by Andy Extance
The builders of Aladin – the Atmospheric laser Doppler instrument – are set to have their wishes granted, albeit a decade late.

The space-based wind profiler, originally intended to launch in 2007, has been held back by its unusual ultraviolet lasers. The instrument must reliably produce beams with peak powers reaching several megawatts for at least three years, in the extreme, unforgiving environment of space.

Project engineers say that the only comparable UV lasers to have faced similar development issues are those at Laser Mégajoule in France and the National Ignition Facility (NIF) in the US, where they are being used to generate nuclear fusion.

As Anders Elfving from the European Space Agency (ESA) stresses: “There is no precedent for a UV laser working over such a long time, at energy this high.”

Yet despite the enormous technical challenges, Aladin has now been integrated into the Aeolus satellite (for which Elfving is the ESA’s project manager), and is currently slated for lift-off on November 1, 2017.

“We are on the cusp of launching a spacecraft that will provide more data on wind than all the ground-based systems [put] together,” adds Frederic Fabre, project manager for Aladin at Aeolus’ prime contractor Airbus Defence and Space in Toulouse. 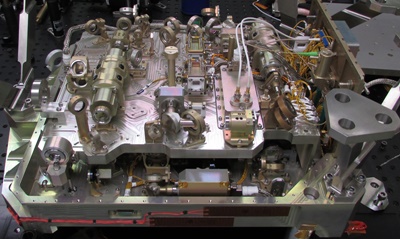 Sensing Doppler shifts
As a Doppler wind LIDAR, Aladin is intended to be the first instrument to look in detail at wind patterns from space. Its diode-pumped Nd:YAG lasers produce 80-110 mJ, 50 Hz pulses at 355 nm - the peak wavelength for molecular Rayleigh scattering of light in the Earth's atmosphere.

Aladin’s detectors then track Doppler shifts of the light scattered back towards it. They must be sensitive enough to pick up wavelength shifts of just 2.4 fm (2.4 x10-6nm) arising from wind speeds of 1 m/s.

Elfving says selecting UV lidar was a ‘brave’ choice, given the relative lack of experience with such sources. The technical issues involved became apparent after the Geoscience Laser Altimeter System (GLAS), an infrared and green light lidar for NASA's ICESat mission, was launched in 2003.

After just three months of post-launch operations, GLAS’ laser energy had dropped by 90 per cent, which Elfving explains was probably due to laser-induced contamination (LIC).

“Organic contaminants, if there is no oxygen, just carbonize on the surface of the optics,” the ESA project manager says. “They hadn’t tested it for long enough under vacuum. That came into our awareness but it wasn't explicit how fundamental a problem it was.

“By 2006/2007 we had demonstrated that even with the extreme cleanliness usual in space, down to parts-per-billion of organics, it still introduced contamination.” The Aladin team therefore explored how much oxygen was needed to burn contaminants off. “To our satisfaction, you need extremely little,” Elfving says.

Changing the design was evidently a major distraction, taking three and a half years through to 2010, and was, in Elfving’s words, “probably the most significant challenge” Aladin faced. Now it appears that the change was an effective one:

“We are very pleased because we’ve just completed a life test over more than half a year with this oxygen feed and we’ve lost just a few per cent transmission efficiency,” he said. 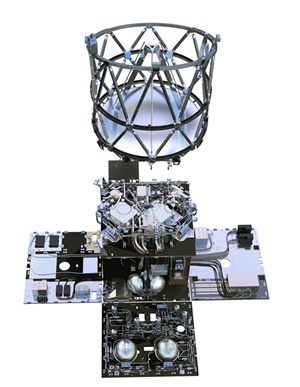 Haunted by stability
Yet LIC was just one in a series of difficulties. The first was ensuring pump diode lifetime and performance stability, over the course of a mission that will require some 5 billion laser shots.

Thermal, mechanical and optical stability have also been “haunting us all the way”, Elfving remarks. “It's an enormous energy that we’re pumping into a very small unit – because volume and mass costs a lot to launch. The supplier had to pack a lot of thermal dissipation into the same optical bench where we have to keep microns and microradians of alignment stability.”

Local heating of the coatings on Aladin’s optical components as the beam passes through them can also reach temperatures of several thousand degrees, potentially causing laser-induced damage (LID).

Any small imperfections will fail in such conditions, rapidly destroying the optics as absorbance grows exponentially. But while coatings for space-based lidar at infrared and visible wavelengths were developed in the mid-2000s, Elfving explains that the coating technology for high-power UV lasers lagged well behind. And although NIF and Mégajoule had required such technology, the Aladin team was unable to learn much from either project because of their classified status.

DLR, the German aerospace research laboratory in Stuttgart, and ESA’s ESTEC laboratories in Noordwijk, the Netherlands, consequently conducted what Elfving calls ‘one of the most exhaustive laser damage test campaigns’ they’d ever undertaken. The solutions included both redesigning the instrument emission path and developing new coatings more robust to LID, Fabre adds.

The improvements come largely due to the efforts of two German firms: LaserOptik, which provides Aladin’s mirrors and coatings, and LayerTec, which supplies its lenses. "The companies see space as a niche that will help in the overall market," Elfving says. "We are keen that this technology is used for other purposes. UV is going to be explored much more, such as in lithography in electronics and photonics."

Help a brother satellite out
The lessons learned by Aladin will benefit Aeolus’ ‘brother’ satellite Earthcare, which is due for launch in 2018, more immediately. Earthcare will also carry a 355 nm lidar instrument into space.

Called ATLID, it is targeting clouds and aerosols rather than Rayleigh scattering from molecules. But, as with Aladin, ATLID’s laser transmitters are being supplied by partner Selex ES (part of the newly branded Leonardo-Finmeccanica) in Rome, Italy.

ATLID prevents LIC by pressurising the transmitter units, avoiding the need for a complex and heavy oxygen-flow system. “Helped by the feedback of experience and knowledge from Aladin, they have progressed much faster,” Elfving says. “The first transmitter is just ready to start integrating into the ATLID instrument.”

Fabre adds that the lessons will also be useful to other missions. “I am sure there will be other wind lidars to further improve climatology,” he says.

Meanwhile, the Leonardo team’s work on Aladin is almost done. “Two laser transmitters were delivered around a year and a half ago, and we’ve just completed a life test on the third laser,” Elfving explains. “We're very confident that the hardware is now fit for purpose.” 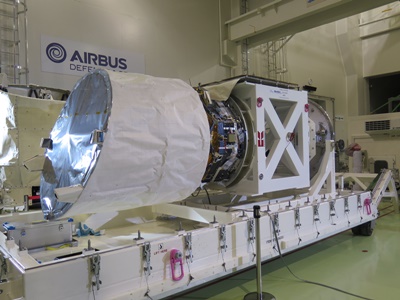 With Aladin now integrated into Aeolus at Airbus UK in Stevenage, the whole payload is currently being tested in ambient conditions, before transfer to a facility for launch survival tests later this year.

Next April, ESA will perform the final vacuum test, operating the satellite as if it is in space ahead of the planned November 2017 launch.

Elfving is very aware that, even after so long, problems could still arise in combining the individual parts.

“This is the last hurdle that worries me,” he says.