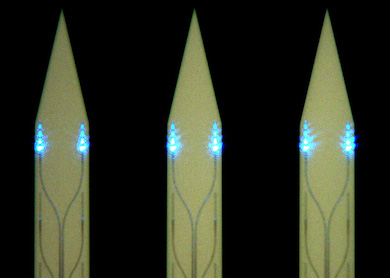 Light-sheet fluorescence microscopy (LSFM) involves using thin planar illumination as a means of limiting the power of light directed at a sample of fragile biological tissues.

This approach typically generates its sheet of excitation light directly from an external laser beam via focusing elements, but the optics involved can be prohibitive for the imaging of larger living specimens, or for animals not naturally transparent.

A miniaturized light-generating component would be a key element of improving the applicability of LSFM, and a team led by Caltech has now developed small neural probes able to be implanted in an animal's brain and generate the appropriate excitation light for fluorescence imaging. The work was published in Neurophotonics.

"It remains a formidable and unsolved challenge to generate light sheets by implantable elements at arbitrary brain depths, while minimizing tissue displacement and remaining compatible with a sheet-normal imaging system," noted the project in its paper.

The probes use sets of nanophotonic grating couplers, the periodic etched structures already used to diffract coupled light in certain directions for applications including silicon photonics, to create a series of optical waveguides.

Caltech integrated its grating couplers onto thin, implantable, 3-millimeter-length silicon shanks between 50 and 92 microns thick, tapering from 82 to 60 microns wide and with sharp tips at the distal ends, according to the description in the Caltech paper. The probes were designed to suit manufacture in standard foundries, for eventual scalability and mass production.

In trials, the probes were first used to image fluorescent beads suspended in agar, followed by in vitro tissue samples and finally in vivo brain tissues. For the latter, using a prototype of the final team's design, the light-sheet neural probe was inserted to a maximum depth of 200 microns, and angled so that the light sheet was roughly parallel to the surface of the brain.

"The probes had 5 to 10 addressable sheets and average sheet thicknesses below 16 microns for propagation distances up to 300 microns in free space," commented the project in its paper. "Imaging areas were as large as 240 by 490 microns in brain tissue."

The form factor and illumination geometry of the probes should ultimately allow integration with gradient index (GRIN) lens endoscopes and miniature microscopes, potentially allowing deeper brain LSFM than the current project has demonstrated.

They may also be readily compatible with a new class of implantable neural probes containing photodetector arrays, currently under development, in which single-photon avalanche diodes and on-chip converters allow an imaging architecture to be integrated into a single CMOS integrated circuit.

"This new implantable photonic neural probe technology for generating light sheets within the brain circumvents many of the constraints that have limited the use of light-sheet fluorescence imaging in experimental neuroscience," said Caltech's Wesley Sacher.

"We predict that this technology will lead to new variants of light-sheet microscopy for deep brain imaging and behavior experiments with freely moving animals."