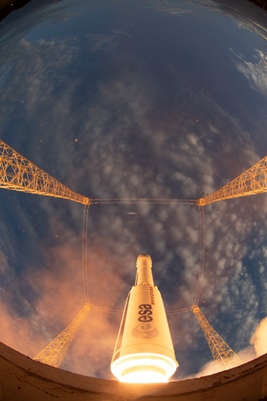 The European Space Agency (ESA) has launched the Aeolus satellite into a polar orbit, carrying on board an ultraviolet laser that will provide far more accurate and detailed monitoring of wind speeds than is currently possible.

“Using revolutionary laser technology, Aeolus will measure winds around the globe and play a key role in our quest to better understand the workings of our atmosphere,” announced ESA following the launch of the 1.4 tonne satellite aboard a Vega rocket. “Importantly, this novel mission will also improve weather forecasting.”

Ironically, that launch was delayed a further day by strong winds at the launch site in French Guiana. But that would have been a minor irritation for a mission that has proved to be one of ESA’s most technologically demanding. Problems with the laser – and in particular the damage caused to system optics over an extended operating period – had delayed the original launch schedule by more than a decade.

Once fully functional, the satellite's “Aladin” instrument – based around a diode-pumped Nd:YAG source operating at 355 nm – will fire 50 high-power pulses each second from its low-Earth orbit into the atmosphere, directly measuring wind speeds as low as 1 meter per second using Doppler lidar.

‘Filling a gap’
Two years ago, Aladin’s project manager Frederic Fabre told optics.org that such is the power of the instrument that it will provide more wind data than all current ground-based systems put together.

“This sophisticated instrument is designed to probe the lowermost 30 km of the atmosphere to provide profiles of wind, aerosols and clouds along the satellite’s orbital path,” states an ESA factsheet on the mission. “Comprising a powerful laser, a large telescope and a very sensitive receiver, Aladin is the first wind lidar in space.”

ESA also points out that the World Meteorological Organization had identified the relative lack of direct global wind profile measurements as one of the major deficiencies in the current “Global Observing System” for weather predictions.

“By filling this gap, Aeolus will improve weather forecasts and climate modelling along with considerable socio-economic benefits,” added the space agency. “In particular, better forecasts of extreme weather events will be of importance.”

The 355 nm wavelength was selected because it provides a particularly strong back-scattering signal from molecules in the atmosphere, but this was also the reason for the much-delayed launch. Among the early technical problems contributing to the decade-long launch delay was the relative immaturity of the laser diodes needed to pump the solid-state source. With around 5 billion laser shots demanded over the course of the three-year mission lifetime, reliability and stability are critical.

But the major source of difficulty were the coatings on the optical components, which must withstand the intensity of the UV pulse bombardment over an extended period without impacting the emitted laser energy. 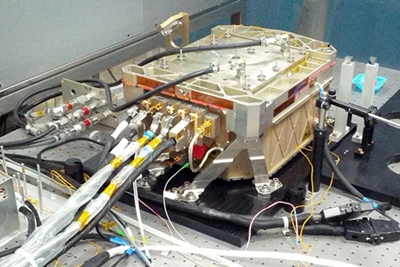 Surface contamination
Problems came to light when another satellite instrument - the laser altimeter on board NASA’s original IceSat mission - lost 90 per cent of its energy after just three months because of contaminants carbonizing on the surface of the optics and distorting the emitted beam.

However, the Aladin team was able to work out a solution: by introducing small amounts of oxygen gas into the optical system, those surface contaminants could be made to “burn off”.

Working closely with two German optics companies – LaserOptik and LayerTec – the optical components and system were then refined for the specific requirements of the Aeolus mission, the payload now including two 30 liter oxygen tanks.

• With contact established through the Troll ground station in Antarctica around one hour after launch, it appears that Aeolus is in position to begin firing its UV laser.

Controlled from ESA’s European Space Operations Centre in Darmstadt, Germany, the satellite payload will first be checked and calibrated during its commissioning phase, before sending back raw data that will be used in medium-range weather models to a ground station in Svalbard, Norway.