Aeolus 'back in business' after switch to back-up laser 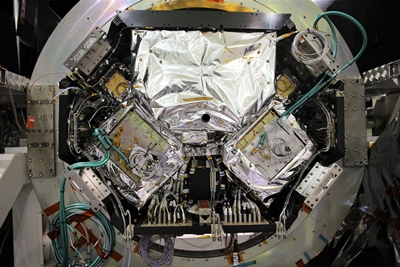 Launched last August, the Doppler lidar instrument’s initial “Aladin” laser suffered from a significant drop in energy levels in recent weeks. Last month, ESA decided that the dip was starting to compromise the quality of wind data being collected.

Mission manager Tommaso Parrinello said in an ESA release: “With the power from the first laser declining, we decided to turn it off and activate the second laser, which the instrument was equipped with to ensure we could address an issue such as this.

“Switching to the second laser appears to have done the trick so we’re back in business. And we are confident that the instrument will remain in good shape for years to come.”

Stable energy levels
Since its launch, which was delayed by more than a decade because of ongoing problems with loss of laser pulse energy caused by optical degradation, Aeolus is said to have delivered excellent data. And towards the end of this year weather forecasters in Europe are planning to feed that data into their forecasts in real time.

Michael Rennie from the European Centre for Medium Range Weather Forecasting (ECMWF) indicated that the switch to the back-up laser had worked well, saying in ESA’s release:

“We were very happy to see the wind data after the switch, and given the fact that when Aeolus was using its first laser we could see that it can improve our weather forecasts off-line, we are expecting even better results with the new setup.”

Denny Wernham, ESA’s Aeolus instrument manager, added: “The great news is that the second laser’s energy is, so far, very stable, which is what we expected since this laser is actually better than the first. This is because we have more scope to adjust it in orbit to retain the performance needed.”

Wernham also stressed that that despite the first laser’s drop in energy, it had operated for nearly a year, providing a “vital dataset” for weather forecasters and climate modelers. “It accumulated nearly one billion shots, which is a record for a high-power ultraviolet laser in space, and we can always go back to it if we need to later in the mission,” he said.

Carbonized contaminants
The “Aladin” laser system on board Aeolus, which is based around a diode-pumped Nd:YAG source that is frequency-tripled to emit at 355 nm, proved to be an extremely difficult project.

Designed to fire 50 high-power pulses each second from its low-Earth orbit into the atmosphere, directly measuring wind speeds as low as 1 meter per second using Doppler lidar, it represents the very first wind lidar in space.

The 355 nm wavelength was selected because it provides a particularly strong signal from back-scattering molecules in the atmosphere, but this was also the reason for the much-delayed launch.

While the early technical problems contributing to the decade-long launch delay was the relative immaturity of the laser diodes needed to pump the solid-state laser, the major source of difficulty arose from damage to the coatings on its optical components.

However, the Aeolus team was able to come up with a solution: by introducing small amounts of oxygen gas into the optical system, those surface contaminants could be made to “burn off”. Whether the ultraviolet laser has suffered a similar problem in orbit has not been made clear by ESA, but the agency appears confident that the second laser has returned Aeolus to full operation.

ESA says that as well as feeding data into real-time weather forecasts, towards the end of this year the Aeolus observations will be used by scientists to learn more about the role of winds in the atmosphere-land-ocean system - and how small and large-scale winds will alter with climate change.