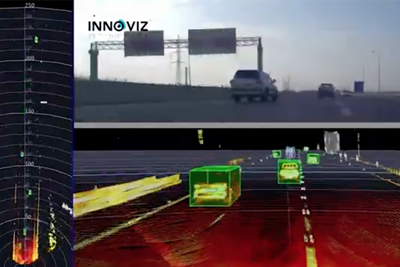 InnovizAPP is said to enable a safe autonomous driving experience.

Innoviz Technologies, a developer of solid-state LiDAR sensors and perception software, has launched its automotive perception platform – “InnovizAPP” – designed for the automotive industry.

InnovizAPP includes automotive-grade hardware and software that enable autonomous vehicles (AVs) to identify and classify objects along the road. The company stated that it is already shipping InnovizAPP “to selected automaker giants, helping them accelerate timelines for consumer AV programs globally.”

InnovizAPP enables a safe autonomous driving experience as it identifies, detects and classifies objects. The system is based on Innoviz's advanced Perception Software, which leverages data derived from its LiDAR sensors, coupled with proprietary AI algorithms, to analyze the point cloud and precisely estimate an object’s speed.

‘Detects and classifies objects up to 250m away’

Innoviz stated, “The software can accurately detect and classify objects in any 3D driving scene up to 250 meters away, including cars, trucks, motorcycles, pedestrians, and more. It also executes perception algorithms in real time, detecting and classifying pixels as collision relevant or non-collision relevant.”

The associated hardware provides an automotive-grade reference design based on low-cost automotive-grade components. It connects to existing vehicle systems and enables real-time perception in a simple plug-and-play manner, allowing automakers to test and learn how to build their own autonomous driving systems.

Omer Keilaf, CEO and Co-Founder of Innoviz, commented, “InnovizAPP is a technology breakthrough, offering an adaptable automotive-grade chip and platform that can be incorporated into existing vehicles.

“We developed it in response to requests from major automakers, and our customers in Asia, Europe, and North America are already optimizing their AV programs with this platform, which is rapidly becoming the gold standard for customer validation.”

Both the perception software and Innoviz's solid-state LiDAR sensor, InnovizOne, are designed and developed to conform with the automotive industry's highest standards and are being adopted by key industry leaders, including BMW.

This news follows Innoviz's announcement in December, 2020, that it entered into a definitive agreement with Collective Growth Corporation, which would result in Innoviz becoming a publicly listed company. The combined company will retain the Innoviz Technologies name, and its ordinary shares are expected to be listed on NASDAQ under the ticker symbol INVZ.

Innoviz claims to be the only company with LiDAR technology that can perceive better than a human driver, while also meeting the automotive industry's strict requirements for performance, safety, and price.

Selected by BMW for its fully electric iX autonomous car program, Innoviz's technology will be the first to be deployed in consumer vehicles. Innoviz is backed the likes of SoftBank Ventures Asia, Samsung, Magna International, Aptiv, and Magma Venture Partners, among others.