Palo Alto startup is working with Waseda University group on a new way to identify circulating tumor cells at an early stage. 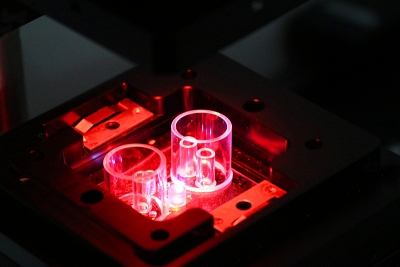 Lucence, a developer of medical diagnostic equipment in Silicon Valley, says it plans to commercialize a new laser imager for early-stage cancer diagnosis by next year.

The company, established by oncologist and CEO Tan Min-Han, is partnering with an engineering research group at Waseda University in Japan. The academic team has developed prototype optical systems that are able to distinguish cancer cell characteristics from a small blood sample, using laser fluorescence.

By measuring key indicators such as the size and shape of those cells, as well as the relative size and number of cell nuclei, it is hoped that the approach will be capable of diagnosing metastatic tumors with a simple blood biopsy.

In a release announcing the partnership, Lucence points to results from a 2014 study on rats by Kenji Yasuda’s team that showed how an optical flow cytometer based around three lasers and an illuminating LED was able to differentiate between animals with and without prostate cancer biomarkers in their bloodstream.

A subsequent 2019 paper by the same research group suggested that a blood sample of only 50 µL would be sufficient to acquire a stable size distribution map of all blood cells to predict the presence of tell-tale clusters of circulating tumor cells (CTCs).

Liquid biopsies
“More than 50 per cent of cancer diagnoses happen in late stages of the disease, when treatment options are limited. Early cancer detection is critical to reducing mortality,” says Min-Han, who led a team that discovered critical details about CTC clusters when he worked at Singapore’s Agency of Science, Technology and Research (A*STAR).

“We are excited to combine our discovery of circulating tumor-vessel cell clusters in early cancers with Waseda University’s engineering expertise to build an early cancer detection technology platform,” he added.

These particular cell clusters are known to be found in multiple tumor types, offering the possibility of using them as a unique biomarker for early cancer detection.

Lucence says that it plans to develop a high-speed microfluidic imaging platform with Yasuda’s team, as well as an “atlas” of circulating cell types, so that CTCs and related clusters can be analyzed with deep-learning algorithms to gain further insights on cancer development.

The company, which already sells genetic analysis tools for cancer and virus diagnostics - including for Covid-19 - says it has secured exclusive licenses from both Waseda University and A*STAR to support the development of the laser-based diagnostic platform for cancer screening and monitoring.

“This collaboration enables the development of a new generation of ultrasensitive cancer screening tests profiling both circulating tumor DNA and cells, projected to be available in the US in 2022,” stated the firm.

“Identifying CTCs using conventional biomarkers often leads to false-negative results,” noted Yasuda. “Together with Lucence, we visualize the end-product to be an easy-to-use diagnostic platform for rapid and automated detection of CTCs and cell clusters in liquid biopsies.”