Lithography giant has also agreed to sell parts of its Berliner Glas subsidiary to Jenoptik. 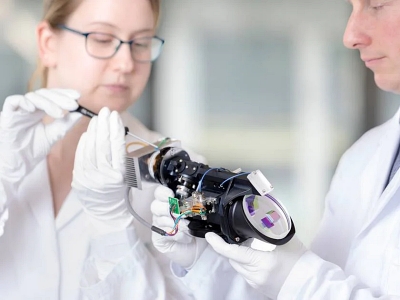 ASML has posted a record-breaking financial quarter on several fronts, with sales up 30 per cent year-on-year to €5.24 billion in the three months ending October 3.

The primary reason for that was the continued boom in demand for extreme ultraviolet (EUV) lithography equipment, where ASML’s huge historic investment has seen it corner the market for the highly complex wafer patterning systems.

Each of the tools relies on a host of optics and photonics components, most notably the ultra-high-power lasers that are used to generate EUV light in the system’s source.

The latest quarter included $2.2 billion attributed to EUV sales, while, at €1.9 billion, pre-tax profit for the period was up nearly 60 per cent on the prior year’s figure.

The upsurge in demand, as chip manufacturers scramble to expand capacity in an attempt to ease the global shortage of electronic components, means that ASML has now posted revenues of just over €13.6 billion so far this year.

For context, that is already only just below the firm’s record-breaking 2020 sales figure of €14 billion, with a full quarter to spare. ASML’s executives expect the closing quarter of this year to generate sales of around €5 billion - meaning that the 2021 total should reach close to €19 billion.

Building capacity
Discussing the latest quarter in an investor conference call, ASML’s CEO Peter Wennink said: “The demand continues to be high. The ongoing digital transformation and current chip shortage fuel the need to increase our capacity to meet the current and expected future demand for memory and for all logic nodes.”

Although there remain some question marks over the true level of demand for semiconductor devices, Wennink pointed to ASML’s total backlog nearing €20 billion - more than half of which is for EUV tools - as evidence of the current market pull.

That total will account for EUV shipments stretching into 2023, with the company expecting to ship 55 high-throughput EUV tools next year as demand from memory chip makers adopting new processes gathers pace.

Meeting both its EUV and deep-UV (DUV) lithography tool shipment targets will be a challenge, however, with ASML itself impacted by the global device shortage - as well as some initial problems adding capacity and a new logistics center the company’s Veldhoven headquarters.

Wennink also pointed out that EUV service upgrades are set to become an increasingly large contributor to revenues, although this will in turn depend on how willing customers are to allow the required tool downtime during a period of such high demand.

Looking further into the future, the CEO said that the entire semiconductor sector would need to add significant new capacity by 2025. By then, ASML expects to be shipping much larger numbers of both EUV and DUV tools, as well as the first high-throughput EUV equipment to offer the additional feature-shrinking power of high-NA optics.

“[We] expect to see new building capacity in the supply chain, to be able to deal with likely market requirements in 2025,” he said. “[It is] not just increasing wafer throughput and equipment installations.”

Jenoptik is set to gain the Berliner Glas Medical and SwissOptic divisions of the company, which together employ around 500 people - approximately half of the total Berliner Glas headcount.

The medical division supplies high-precision, custom optical components for applications including endoscopes, dentistry, and robotic surgery, while SwissOptic specializes in the development and manufacture of optical components and assemblies used across a number of different market sectors.

The deal includes SwissOptic’s Chinese subsidiary, which is based in Wuhan, and is expected to add around €130 million in annual revenues to Jenoptik’s turnover.

Commenting on the switch, Jenoptik’s CEO Stefan Traeger said: “We will strengthen our global and fast-growing photonics business by significantly expanding our already strong semiconductor equipment business, and, in particular, our highly attractive medical technology business.”

Although ASML is to retain the elements of Berliner Glas of particular significance to lithography, Jenoptik will gain from SwissOptic’s business in other areas of the semiconductor sector.

Jenoptik says that as well as adding new product lines, this will deepen its existing, long-standing relationship with ASML.

Although the transaction is still subject to approval by antitrust authorities in Germany, it is expected to close by the end of the year.

• Following the latest updates, ASML’s stock price inched down a few points on the Nasdaq. At just under $800 in early trading October 20 - down from an all-time high of nearly $900 last month - the company’s market capitalization currently stands at around $320 billion.