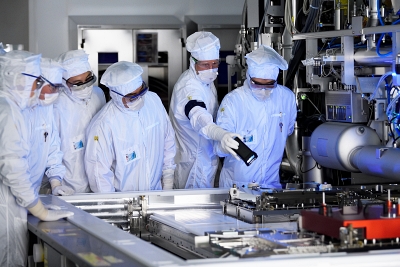 Up 18 per cent on the 2019 figure, the 2020 total included €4.5 billion from sales of 31 extreme ultraviolet (EUV) lithography systems, which rely on high-power “drive” lasers and a second “trigger” laser that are fired at a stream of tin droplets to produce EUV light inside each system’s source.

Booming demand in a year characterized by an enforced shift to remote working, education, and socializing also saw ASML’s profit margins jump, with the company reporting net income of €3.6 billion - up from €2.6 billion in 2019.

Digital infrastructure boom
ASML’s CEO Peter Wennink indicated that demand was set to remain strong this year, saying: "For 2021, we expect another year of growth driven by strong logic demand and continued recovery in memory [chips].

“The build out of the digital infrastructure and the continued technology innovation is relevant to the consumer, automotive, and industrial markets, and drives demand across our entire product portfolio.”

Recent reports suggest that key customer TSMC in particular is planning a huge investment in production capacity this year, while several major automotive companies are now said to be scrambling to source chip components after an unexpected boom in demand for cars.

The Taiwanese chip foundry said last week that it was planning to spend up to a colossal $28 billion this year - largely for cutting-edge processes that are likely to use EUV. TSMC is currently building a new fab in Arizona, with Bloomberg reporting that Intel will become one of its customers after suffering internal production issues.

According to the Financial Times, the world’s largest carmakers are facing a “potentially crippling” shortage of semiconductors, as chipmakers reserve supply for consumer electronics customers for use in smart phones, tablets and gaming devices.

Reportedly, Volkswagen, Nissan, Honda, and many more are all being forced to cut production - partly a result of fast-growing demand for electric vehicles, which use significantly more semiconductor devices.

EUV growth
“In our EUV business, we celebrated the milestone of the 100th EUV system shipment,” revealed ASML in its results announcement. “By the end of 2020, 26 million wafers were exposed on our EUV installed base, of which 9 million [were] in the fourth quarter.”

CFO Dassen added that bookings in the closing quarter of the year were very strong, and included orders for six more EUV systems.

“EUV is doing very well, both on the logic front and on the DRAM [memory] front,” he said. “EUV demand is developing very, very strongly. We have an order book of €6.2 billion.”

And with the latest iteration of ASML’s EUV system - the “NXE:3600D” - scheduled for release this year, profit margins on the cutting-edge technology should finally match those of the wider company. Dassen expects EUV systems sales to rise 30 per cent this year, reaching €5.8 billion.

“We are making good progress in our [EUV system] manufacturing capacity - primarily by driving down the cycle time,” he explained. “The one limiting factor that we have this year really is the orders that we placed into the supply chain. We had to adjust that during the Covid-19 situation. That will be the limiting factor for this year.”

High-NA tool available in 2023
Looking further into the future, the CFO predicted that the next generation of EUV, featuring high numerical aperture optics to make even smaller patterns, would be required in about five years’ time. ASML is working in tandem with key partner Zeiss on those optics.

“There will be a certain point in time where customers will no longer be able to perform to meet the demands of their customers by applying double patterning,” Dassen said. “Then they will have to go beyond that. They will want to reduce the process complexity. That will then require the need for high-NA.”

Preliminary modules featuring the high-NA reflective optics should be integrated later this year, with the first research-grade lithography system anticipated next year at ASML’s own facility.

“Customers will then have access to that tool in 2023,” added Dassen. “In 2023, we will also see the first initial installations of high-NA tools at customers. Then in the 2025-2026 timeframe, that is where we will really see high-NA going into high-volume manufacturing.”

• Following the latest results announcement, ASML’s stock price continued its recent upward surge. In pre-market trading on the Nasdaq, it rose above $550 for the first time in the company’s history.

That represents an increase of more than 50 per cent in the past three months alone - and means that the company now commands a market capitalization in excess of $220 billion.