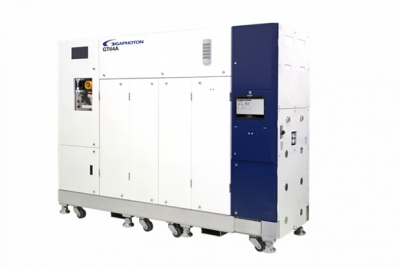 Gigaphoton, the Japanese company that provides excimer lasers for semiconductor lithography applications, says it will double production capacity of the light sources by 2023.

The decision comes in response to pressure on the semiconductor supply chain, with Gigaphoton aiming to complete the construction of a new facility by April 2022.

Although excimer lasers are not used in the latest extreme ultraviolet (EUV) lithography tools, EUV is only used for a limited number of processing steps in semiconductor wafer and chip production - with deep-UV (DUV) light from excimer sources still used as a workhorse for the bulk of patterning steps.

New facility
Gigaphoton says that it is seeing increased demand for excimer lasers as semiconductor manufacturers accelerate their investment in key equipment in response to the global shortage of devices - and the company expects that high level of demand to remain strong for the foreseeable future.

“To meet this increase in demand, Gigaphoton is constructing a new facility, with its doors to open in April 2022, in order to establish a more stable supply system,” announced the firm.

“Through this initiative, Gigaphoton will double its production capacity by 2023 while maximizing the use of production equipment, and streamlining and optimizing its production process.”

Company president and CEO Katsumi Uranaka added: “With demand for semiconductors on the rise around the world, we will do our utmost to meet the demand from our customers.

“This fiscal year, we will make full use of our existing resources for production, and improve the efficiency of our production planning and lead times. Next year, the new facility will be completed and we will have a more stable supply system in place.”

Latest lasers
Last year, Gigaphoton launched its latest “G60K” KrF excimer source, a laser operating at 248 nm with an output of up to 60 W and 15 mJ per pulse, to support higher-throughput lithography equipment.

The company also began mass production of its “GT66A” ArF excimer laser for immersion lithography. It is used in ASML’s “NXT:2050i” lithography tool, and features an upgraded optical module that improves the beam uniformity on the semiconductor wafer, reducing surface roughness for production of state-of-the-art devices.

The maintenance cycle of the optical module was also extended by 30 per cent, thanks to the introduction of the new components with better durability.

Although Gigaphoton previously did extensive work on the development of an EUV light source as part of a wider Japanese consortium, the huge complexity of the required system saw that effort disbanded - leaving ASML and its subsidiary Cymer as the only provider of reliable EUV sources, based around dual laser excitation.