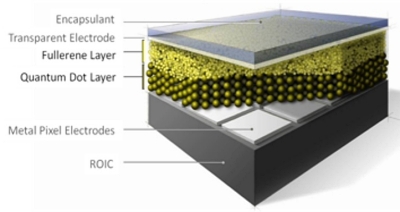 SWIR Vision Systems, a Durham, North Carolina, startup that has developed novel photodiodes based on colloidal quantum dots (CQDs), says it has raised $5 million in a series A round of venture funding.

The cash injection, provided by a number of investors including the Keiretsu Forum angel investor network, will be used to develop more sensors, and grow the company’s short-wave infrared (SWIR) camera business across a number of applications in industrial and defense markets - including laser beam profiling.

High-def SWIR imagery
Founded in 2018 as a spin-out from the Research Triangle Institute (RTI International), SWIR Vision Systems has since developed its “Acuros” range of thermoelectrically cooled CMOS-based CQD sensors, offering up to 2.1 megapixel resolution.

The “eSWIR” version of the product family operates across an extended wavelength range, between 350 nm and 2000 nm, with a pixel pitch of 15 µm.

The technology, based on lead sulfide CQDs, is said to have the potential to reduce the cost of expensive infrared cameras typically employing indium gallium arsenide (InGaAs) detectors, towards the much lower price point of silicon-based devices.

Quantum efficiency
According to a white paper available via the company’s web site, the quantum efficiency of the CQD detectors has been advanced to 60 per cent at 940 nm, and to 45 per cent at 1550 nm - two key wavelengths for laser diode operation.

“We expect that a continued focus on device development will yield further advances in the performance of CQD-based photodetectors,” stated SWIR Vision Systems in its conclusion to that paper.

Commenting on the series A round, CEO George Wildeman said: “We are appreciative of this strong vote of investor confidence in our team and our technology.

"The reception we've encountered in the industry has been extraordinary. We look forward to expanding our business in the industrial imaging market, while working with the world’s top automotive and consumer electronics companies to explore applications of our fully scalable CMOS-based SWIR sensor solutions.”

Howard Lubert, area president for the Keiretsu Forum’s mid-Atlantic division, added: “Keiretsu Forum is excited to work with SWIR Vision Systems and its outstanding leadership team to help bring a disruptive innovation to the industrial automation and autonomous vehicle markets.”