Two of the biggest names in optical and infrared sensor technology are set to merge. 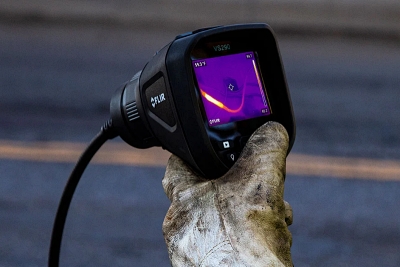 FLIR Systems, one of the best-known companies in infrared and thermal imaging, is to become part of Teledyne, after the two firms agreed a cash-plus-stock merger deal valuing FLIR at some $8 billion.

Representing a 40 per cent premium to that implied by recent trading activity on the Nasdaq, Teledyne is partly financing the deal with a new $4.5 billion loan.

Provided that shareholders of both companies and regulators approve it, FLIR and Teledyne say that the merger should be completed by the middle of this year.

If all goes according to plan, it will create a company employing some 16,000 people with sensor and camera expertise spanning almost the entire breadth of the electromagnetic spectrum - from X-rays to radio-frequency devices.

Different wavelengths
Announcing news of the deal, Teledyne’s executive chairman Robert Mehrabian stressed the complementary nature of the technologies provided by the two firms - adding that he felt regulators would have no reason to block the acquisition on competition grounds.

“At the core of both our companies is proprietary sensor technologies,” he said. “Our business models are also similar: we each provide sensors, cameras, and sensor systems to our customers.

“However, our technologies and products are uniquely complementary with minimal overlap, having imaging sensors based on different semiconductor technologies for different wavelengths.”

Mehrabian told an investor call to discuss the deal that he did not expect the merger to lead directly to any site consolidation, because of the almost entirely complementary nature of the two businesses.

FLIR’s CEO Jim Cannon added: “Together, we will offer a uniquely complementary end-to-end portfolio of sensory technologies for all key domains and applications across a well-balanced, global customer base.”

According to an investor presentation, imaging currently accounts for just under one-third of Teledyne’s roughly $3 billion annual turnover. FLIR’s business would add $2 billion to that total - creating a $5 billion company with around 60 per cent of revenues attributable to imaging technologies.

The other two-thirds of Teledyne’s business comprises instrumentation, aerospace and defense electronics, and engineered systems - with products ranging from autonomous underwater vehicles to turbine engines.

Complementary offerings
Noting the spectral breadth of sensor expertise that the combined company would have access to, Mehrabian highlighted FLIR’s use of several different semiconductor materials in its infrared sensors - for example indium antimonide (InSb) and indium gallium arsenide (InGaAs).

Teledyne’s existing strengths in the imaging sector come largely from its acquisitions of Canada's DALSA back in 2010, UK-based e2v Technologies in 2017, and of Roper Industries’ various scientific imaging brands - including Princeton Instruments and Photometrics - the following year.

In terms of applications, Teledyne has typically focused on high-end imaging - its e2v division is involved in a number of high-profile space missions - while FLIR’s business encompasses everything from airborne military imaging to low-cost, handheld imagers in automotive, consumer, and security markets.

However, FLIR’s business has been changing under Cannon's stewardship. “Over the last two years, FLIR has embarked on a strategic pivot,” observed the FLIR CEO. “Away from commercial and consumer markets, [and] to strengthen and grow our industrial and defense business.

“Our offerings are uniquely complementary to Teledyne’s, and we serve different customers, with different applications.”

• While FLIR’s stock price jumped in value immediately to reflect the acquisition price, Teledyne’s own valuation slumped nearly 8 per cent on news of the merger plan.

That was despite Teledyne also announcing that better-than-expected sales in the closing three months of 2020 would enable it to post its best-ever quarterly profits.