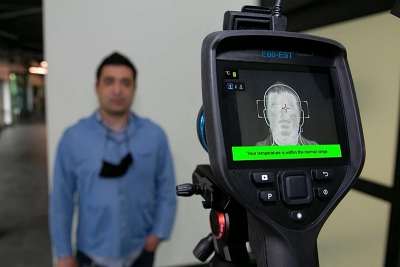 The thermal imaging equipment maker FLIR Systems has reported a continued surge in demand for its elevated skin temperature (EST) monitors, a screening technique being deployed widely to combat the spread of Covid-19.

Last week Arligton, Virginia, based FLIR said it had received $70 million worth of orders for EST cameras in the financial quarter ending June 30.

Although that figure is down from $100 million in the opening quarter of the year, it still represents a much higher volume of business than normal. Revenue from sales of the equipment in the June quarter amounted to $90 million.

First line of defense
While the EST screening equipment cannot diagnose Covid-19 directly, it is able to identify people with unusually high temperatures that may in some cases indicate a fever that is being caused by the underlying viral infection.

FLIR’s CEO Jim Cannon describes the tools as a “first line of defense” against the disease, and recent developments mean that the cameras are able to rapidly screen large numbers of people entering hospitals, transport hubs, factories, offices, and other key locations where the virus may be able to spread widely.

“In the early days of the pandemic, through much of May, we saw demand surge,” Cannon told an investor conference call discussing the firm’s latest financial results.

“During this time, a wide array of enterprises across both essential and non-essential businesses, placed initial orders for our solutions as they explored strategies to fully re-open as quickly and safely as possible.

“Towards the second half of the quarter, certain customers began shifting their behavior, opting instead to first implement our technology on a smaller scale to test their approach in advance of eventual large-scale enterprise-wide deployments.

“This more measured approach to deployment led to a deceleration of EST demand as the quarter progressed.”

Cost cuts boost earnings
Looking to the remainder of 2020, Cannon said that the company was expecting demand for the screening equipment to stabilize at levels below what had been seen in the June quarter - although that would depend on several variables and Covid-related uncertainties.

What is clear now is that demand for the EST cameras in the first half of the year helped offset a slowdown in business elsewhere at FLIR. However, Cannon said the company was now “cautiously optimistic” of a recovery starting in the second half of the year.

At $482 million, FLIR’s sales in the latest quarter were virtually identical to the same period in 2019, with pre-tax income of $81.9 million up strongly after the company began implementing a series of cost-cutting measures earlier this year.

On the operational side those actions have been concentrated on selling, general, and administrative costs - down more than 10 per cent year-on-year - while research and development spending has increased by almost the same degree.

Although FLIR’s executives did not identify any specific revenue targets for the September quarter, they did indicate that sales in the second half of the year should be slightly higher than in the first half.

Canadian airport roll-out
Asked about the nature of the purchases of EST equipment, Cannon said that FLIR’s equipment was set to be rolled out across several airports in Canada, following initial deployment at four major hubs in the country.

The CEO added that the continued demand for the equipment was unlike anything it has experienced previously. “If we go back and look at past pandemics, we've never seen demand curves like this,” he told investors. “There would be a sharp demand curve like we saw [in] Q1, early Q2. And then there would be a resolution.”

“Now you're seeing very large organizations that want to put in technology that's a part of how they will do business for the long term going forward, not just to combat this, but what could be a future outbreak,” Cannon added.

• Following the update, FLIR’s stock price dropped in value by around 13 per cent on the Nasdaq. Trading at around $37.50, the company now commands a market capitalization of just under $5 billion.