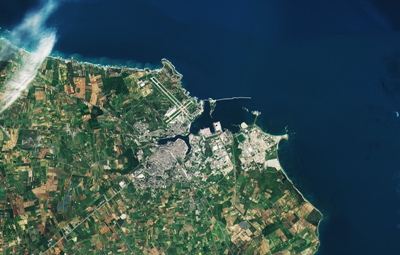 e2v makes a range of high-performance image sensors, custom camera parts and other devices aimed at the machine vision sector, and is probably best-known for its participation in a large number of high-profile space missions with NASA and the European Space Agency (ESA) - for example the Rosetta/Philae comet mission.

As recently as this month, e2v's sensor capability has been showcased following the launch of ESA's latest "Sentinel-2B" Earth observation satellite (see right), part of the wider "Copernicus" constellation.

In e2v’s latest complete financial year, ending March 2016, imaging applications accounted for £103.5 million of the company’s total £236.4 million turnover. With the Teledyne switch complete, e2v’s stock is no longer traded on the London Stock Exchange, where it had been listed since 2004.

Teledyne chief Robert Mehrabian said after the deal was completed: “Every business within e2v is highly complementary to Teledyne and will contribute to our balanced portfolio of highly engineered products.

The e2v footprint already extends well beyond the UK, with key locations in Grenoble, France, and Seville, Spain, following acquisitions completed by e2v in the years since it span out of the GEC-Marconi in a management buy-out.

Teledyne’s scientific and imaging division was awarded the deal by the French Space Agency and the Centre National d’Études Spatiales (CNES), and will provide both infrared detectors and electronics for the ESA’s “JUICE” mission (the acronym is shorthand for Jupiter Icy Moons Explorer).

JUICE is expected to launch in 2022 and reach Jupiter in 2030 to undertake a three and a half year study of the solar system’s largest planet and three of its largest moons: Callisto, Ganymede and Europa.

The detectors and focal plane electronics will constitute key elements of the “MAJIS” (Moons And Jupiter Imaging Spectrometer) kit, one of ten instruments in the JUICE science payload, and one that will study the composition of the Jovian atmosphere and the surfaces of its satellites.

“Teledyne is proud to be a partner in the MAJIS instrument and contribute to the success of ESA’s JUICE mission,” commented CEO Mehrabian. “This mission exemplifies Teledyne’s commitment to exploration and discovery, from the ocean floor to deep space.”