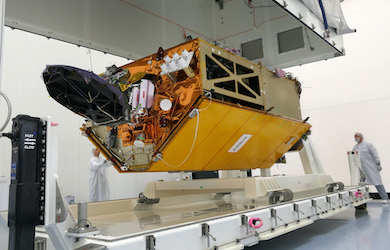 Readying for launch: Sentinel-6 being prepared

Teledyne e2v has announced that its image sensors have been selected by the program for intended inclusion in two forthcoming Sentinel-based missions currently under development, termed CHIME and CO2M.

Both missions are among the High Priority Candidate projects being readied for inclusion in the second-generation "Copernicus2.0" program, to "address EU Policy and gaps in Copernicus user needs, and to increase the current capabilities of the Copernicus Space Component," according to the project.

The last element of the initial set of Sentinel missions, Sentinel-6B, is due for launch in 2026, with Copernicus2.0 then proceeding with missions 7 through 12.

CHIME, for Copernicus Hyperspectral Imaging Mission, will provide complementary hyperspectral observations to those already being delivered by the Sentinel-2 satellite pair since their launch in 2015 and 2017. The prime contractor for CHIME is Thales Alenia Space, with the instrument scheduled for Sentinel-10.

"Compared to currently flying multi-spectral missions, CHIME will have an increased number of narrow spectral bands in the visible-to-shortwave infrared range, which will allow for a more accurate determination of biochemical and biophysical variables," according to science advocacy group Future Earth in its study of the Copernicus2.0 program.

The CHIME mission will provide hyperspectral observations at a spatial resolution of 20 to 30 meters, allowing users to distinguish opaque clouds, thin clouds, cloud shadows and vegetation. Its data should be of value in agriculture, food security, biodiversity and forestry, among other sectors.

"This is excellent news in two respects for the CHIME mission," said Miles Adcock of Teledyne e2v. "First, the UK facility has been able to continue the long-standing supply of imaging sensor technology to the Copernicus Sentinels. Second, we have developed a UK infrared detector design and manufacturing capability that utilises the world's best base detector substrate materials from within the Teledyne Imaging group."

CO2M, or Copernicus Anthropogenic Carbon Dioxide Monitoring, is due to fly on Sentinel-7, with Germany's OHB System the prime contractor and Thales Alenia Space responsible for the CO2M payload.

Sentinel-7 is itself due to consist of three separate vehicles, detecting the spectral absorption signals of carbon dioxide in infrared sunlight reflected off Earth’s surface and measuring concentrations to a precision of 0.7 ppm. The satellites will also be given additional instruments for detection of nitrogen dioxides emitted from burning fossil fuels at high temperature. The goal is to help locate carbon dioxide plumes produced by humans and distinguish them from carbon dioxide coming from natural sources.

"The high spatial and temporal resolution planned for this mission represents a step-change in what is currently available for measuring carbon dioxide from space," Future Earth commented. "ESA aims to launch CO2M by the end of 2025, and it is expected to provide data from 2026 to support the second global stocktake of greenhouse gas emissions, to be concluded in 2028 by countries participating in the Paris Agreement."

According to Teledyne e2v, its products due for inclusion in CO2M include sensors from the company's Capella range of CMOS products as primary visual sensors for CO2 and NO2, and also for use as visible and near-infrared (VNIR) detectors in a multi-angle polarimeter instrument.

A Cloud Imager (CLIM) instrument onboard the same mission will also employ a Capella CMOS digital image sensors, a product specified as having a 2048 by 2048 resolution of 10-micron pixels.

"We have a proud heritage of supplying the Sentinels with CCD and CMOS detectors," commented Christophe Tatard from Teledyne e2v. "With this extension of the programme we are very excited to now be providing a short-wave infrared detector as well as the VNIR detectors."