French photonics firm still feeling the impact of lower research lab spending, but lidar business grows and CILAS could be next acquisition. 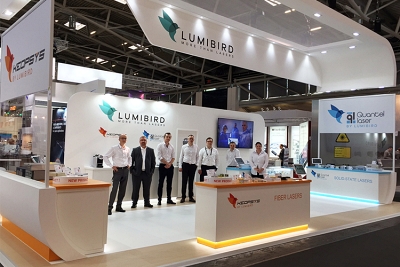 The Paris-listed laser and photonics company Lumibird has reported sales revenues of €127 million for 2020, up 14 per cent on 2019 - thanks mainly to last year’s acquisition of Ellex.

And although like-for-like sales for the year were down by around 10 per cent on 2019, company executives are hopeful that the business will grow strongly this year.

“Lumibird is approaching 2021 with confidence, backed by an extensive order book, confirming the upturn on the Group’s various markets,” announced the firm, which is targeting average annual organic sales growth of 8-10 per cent over the next three years.

Given that full-year revenues would have been close to €150 million with a full year of Ellex contributions, that rate of growth should push Lumibird towards the internal target of doubling 2019 revenues to reach €200 million by 2023.

“The industrial and scientific business continued to be penalized by the closure of many universities and research laboratories, with a 4.4 per cent contraction for the [final] quarter,” Lumibird reported.

Sales of €48.2 million in the latest quarter - up 40 per cent on the same period in the prior year and the only quarter in 2020 showing organic growth - indicate a return to form.

Confident about the immediate future, Lumibird said it would “continue moving forward with its combined organic and external growth strategy” - and it looks like the next move could be a deal to buy the highly regarded photonics company CILAS.

CILAS targeted for acquisition
Last week, Lumibird confirmed that rumors published in the French newspaper La Tribune were true, and that such a deal would be in line with its development strategy.

“CILAS and Lumibird have highly complementary technology portfolios which together would constitute the European leader in laser technologies for the defense market, and could thus be the technological partner of major defense integrators,” said the firm, which now employs more than 800 people.

CILAS, which also makes deformable mirrors for adaptive optics applications in astronomical imaging and potentially for laser weapons, is currently part of the Ariane defense group of companies and is part-owned by energy giant Areva.

Like Lumibird, CILAS has provided critical photonic components for the Laser Megajoule fusion project near Bordeaux, one of the largest and most powerful laser systems in the world. However, the La Tribune article suggests that missile maker MBDA and defense technology giant Safran are also interested in acquiring CILAS.

Last year, CILAS and Ariane reported the first results from a prototype laser weapon system called “HELMA-P” that they are developing to shoot down unmanned aerial vehicles (UAVs).

“HELMA-P convinced from the very first shots with its precision, efficiency, and ability to neutralize in-flight targets up to one kilometer away in seconds,” they claimed.

“All firings systematically destroyed UAVs capable of speeds above 50 km per hour, and in difficult target tracking conditions.”