ASML looks to future as focus falls on China-US tension

Lithography giant caught in geopolitical crossfire but busy preparing for an EUV-powered future. 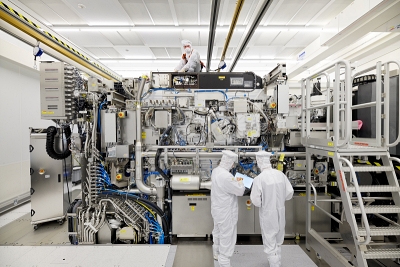 ASML’s CEO Peter Wennink has told a press conference that the delayed issue of a license permitting it to sell state-of-the-art chip manufacturing equipment to a Chinese customer will have “zero impact” on the company’s finances.

Although arranged to discuss the Netherlands-based lithography giant’s 2019 financial results, attention among reporters turned immediately to the “elephant in the room” - diplomatic wrangling between the US and China, and how it was affecting ASML.

Export license
Speaking publicly for the first time since Reuters reported that US authorities had pressed their Dutch counterparts to block the sale of extreme ultraviolet (EUV) lithography equipment to a Chinese customer, Wennink explained that even though ASML had been doing business in China for three decades, it required a special license to ship EUV systems to customers in the country.

The key difference between EUV and older lithography equipment is that the latest systems - needed to pattern intricate layers in today’s most advanced semiconductor chips - are covered by the so-called Wassenaar Arrangement.

That international agreement, first signed by participating countries in The Netherlands in 1995, restricts exports of “dual-use” technologies that can be used in either civilian or military applications - largely to stop them getting into the hands of terrorists.

As Wennink told reporters, ASML is able to sell its equipment to any of the 42 countries signed up to Wassenaar. However, China is not a signatory, meaning that the company has to apply for a license from the Dutch government to complete the shipment of any EUV kit ordered by a customer in China.

The vast majority of ASML’s EUV shipments are destined for the US, Korea, and Taiwan - to key customers like Intel, Samsung, and the Taiwan Semiconductor Manufacturing Company (TSMC) foundry.

Although Wennink would not confirm the identity of ASML’s Chinese EUV customer, it is widely believed to be another foundry, Shanghai-headquartered Semiconductor Manufacturing International Corporation (SMIC).

‘Sensitive technology’
The CEO said that ASML had applied to the Dutch government for a new export license to ship an EUV tool to a customer in China after an existing license expired in June 2019 - adding that he was surprised to have had to wait so long for it to be renewed.

The reason for that delay appears to be the pressure put on Dutch authorities by US officials worried about China acquiring EUV systems, although whether that is because of their potential for military use or simply to hamper China's development of technologies like 5G communications is unclear.

But China cannot get the equipment from anywhere else: after spending around €10 billion on their development, ASML is the only company capable of making the hugely complex €100 million-plus pieces of equipment. The company also insists that the degree of know-how demanded makes it virtually impossible to copy the technology.

According to a report last week in the Dutch business newspaper Financeele Dagblad, the US ambassador to the Netherlands Pete Hoekstra confirmed that the US did not want what it considers to be a “particularly sensitive technology” to ship to China. The vast majority of the parts that make up an EUV system originate in Europe, meaning that the US cannot directly block such sales, but diplomatic pressure does appear to have been applied.

That came after the same newspaper spoke to Hoekstra’s Chinese counterpart Xu Hong, who is said to have made it clear that there may be consequences if the EUV export license is refused.

The geopolitical crossfire has put both the Dutch government and ASML into a difficult position - although Wennink insists that if shipments of EUV to China are blocked, the company’s plans will be largely unaffected as the systems will simply be shipped elsewhere to meet growing global demand for the latest cutting-edge devices.