New prediction from analysts at Yole Développement suggests $3.8BN market by 2025 - much lower than its earlier estimates. 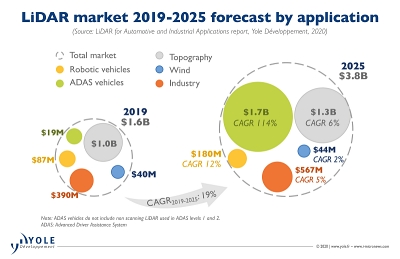 The market for lidar equipment will more than double in size over the next five years, and be worth $3.8 billion by 2025.

But the latest projection, by analysts at the French market research company Yole Développement, represents a major adjustment in expectations, reflecting sharp recent falls in the price of the photonics-based technology.

Previously, the analyst firm had expected the lidar sector to be worth some $6 billion by 2024.

Shifting landscape
Next week, Yole is set to host a series of virtual events dedicated to various topics within the photonics sector. On September 10, its Imaging & Lidar for Automotive Forum 2020 will take place with contributions from the likes of chip maker ON Semiconductor and lidar firm SureStar.

Yole's latest lidar report still suggests that the impetus for market growth will come largely from the automotive sector as equipment prices fall.

“The lidar landscape is shifting,” it stated. “Unit prices have been dropping and are expected to drop further in coming years. This will ease lidar adoption in new applications, either automotive or industrial.”

On the other hand, adds the analyst firm, meeting the requirements of these new applications demands new types of lidar equipment with more dedicated specifications. “This particularly unstable situation is shaping the strategy of several key players,” notes the report.

Currently, the entire lidar market is said by Yole to be worth $1.6 billion, with applications in topographic mapping accounting for $1 billion of that total.

Yole’s analyst team identifies Sunnyvale-based Trimble as the current market leader, with lidar-related sales of $333 million in 2019. Next comes the Swedish firm Hexagon, with $304 million, and Germany’s SICK is ranked third with sales of $202 million.

Both Trimble and Hexagon are focused on applications in topography, while SICK is an expert in industrial and factory automation.

Auto offerings
Outside mapping, other industrial lidar applications are currently worth just under $400 million, while deployments in advanced driver assistance systems (ADAS) and robotic vehicles together only amount to a little over $100 million.

But that is all set to change, with ADAS-related use of lidar expected to proliferate at a compound annual growth rate (CAGR) exceeding 100 per cent and be worth $1.7 billion by 2025.

Deployments in robotic vehicles are expected to grow at a far more modest rate, while the much more mature sector in topographic mapping will rise at a CAGR of 6 per cent to become a $1.3 billion market over the same time period.

At that point, Yole expects lidar units to be found in approximately 3 per cent of all personal vehicles. But it comes as the automotive sector faces huge financial challenges from the Covid-19 pandemic and the move away from combustion engines towards electrification.

Among those companies offering automotive lidar products, California-based Velodyne is ranked fifth among all lidar equipment makers, with Valeo, Ouster, Leddartech, and Waymo all featuring in the top 20 in terms of revenues.

“Velodyne has seen its revenue decline in 2019 due to unit price reducing,” points out the Yole report, adding that this is in fact a deliberate strategy by the Silicon Valley company, which recently agreed a “reverse merger” investment that will see it list on the Nasdaq.

“Valeo is already providing lidar for Audi," added the analyst team. "Innoviz has plans with BMW, Luminar [Technologies] with Volvo, Velodyne with Huyndai, Denso with Toyota, and Ibeo with Great Wall. All these companies plan to release cars equipped with lidar by 2022." 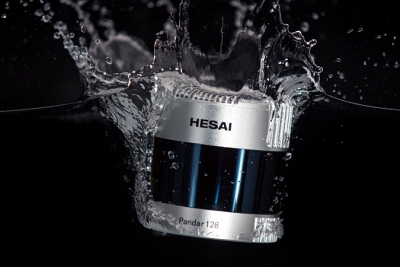 The analyst team notes that as well as benefiting from lower costs, lidar manufacturers in China can tap into numerous projects in the country related to autonomous driving and logistics.

“The first autonomous port terminal happened in Qingdao, China, in 2017,” states the report. “Smart cities, autonomous mining equipment, and delivery robots are all happening in China.”

In a recent tear-down report by Yole affiliate System Plus Consulting, a lidar unit for ADAS produced by China’s Livox was revealed to be based around 905 nm laser diodes and photodiodes provided by Hamamatsu.

Yole’s latest report identifies dozens of other companies working on automotive lidar, which is expected by many to become a hugely lucrative market in the longer term, as autonomous vehicles become more sophisticated.

Among those, Luminar is another to have recently agreed an investment deal via a merger that will see it listed on the Nasdaq. The San Francisco firm, which uses a 1550 nm fiber laser in its systems, counts Peter Thiel among its key backers.

"Being listed on the stock market will force the[se] companies to become profitable," Yole told optics.org. "Projects to integrate lidar in automotive or industrial systems take a couple of years." But Yole says that Luminar and Velodyne both have several of these projects under way, and regards both as leaders in the lidar industry.

Other US firms to have won significant support include Aurora, AEye, Cepton, and Ouster, while in Europe Ibeo Automotive, Blickfeld, Continental, and PhotonicVision are among those mentioned in the Yole report.

Some of Japan’s best-known technology names - including Sony, Pioneer, and Panasonic - are also involved, while outside the major global economic blocks Israel’s Innoviz and Australia’s Baraja have successfully attracted venture support.

Silicon photonics and FMCW
Regarding the various different technological approaches to automotive lidar that are currently under development, Yole points out how developments like the use of VCSEL sources in Ouster’s system have helped reduce the typical weight of an automotive lidar unit from an unwieldy 10 kg to less than a kilogram.

Other companies are working on silicon photonics approaches to further shrink that footprint. For example SiLC’s frequency-modulated continuous-wave (FMCW) technology has been integrated within a prototype lidar headlamp, in collaboration with Varroc Lighting Systems.

The FMCW approach, whose advantages include the capture of Doppler-shifted data indicating the direction of other vehicles on the road, is also being pursued by the likes of Aurora-Blackmore, Aeva, Cepton, Zeiss-backed Scantinel Photonics, and Baraja, while a group at chip giant Intel is working to advance the technology via its silicon photonics platform.

Yole’s report suggests that the FMCW and silicon photonics approaches will not reach maturity for long-range lidar until the mid-2020s - after rival schemes based on MEMS mirrors, fiber lasers, and flash techniques.

"The system needs to be designed from scratch," explained the analyst team. "Therefore, it will take several years for FMCW technology to be adopted by the automotive industry."