Yole Développement predicts annual growth in excess of 60% for next five years as autonomous vehicle revolution kicks in. 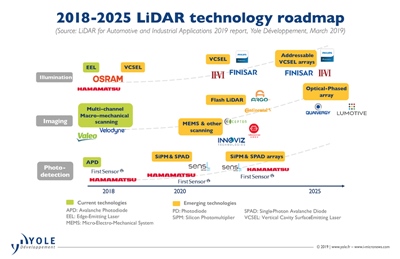 That’s the latest prediction from the France-based consulting company Yole Développement, whose analysts have been taking a close look at the technologies being developed for the likes of BMW, Chrysler, and Audi.

In the company’s new report, entitled “Lidar for Automotive and Industrial Applications”, Alexis Debray and colleagues track the emergence of automotive lidar from DARPA’s 2005 “Grand Challenge” through to today’s miniaturized and solid-state systems.

“The development of robotic vehicles is accelerating, and one leader has emerged,” reports the analyst firm, highlighting the fleet of 600 vehicles now operated by Google affiliate Waymo. “Several announcements have been made about increasing this number up to 82,000 vehicles using Chrysler Pacifica Hybrid minivans and Jaguar I-Pace SUVs,” Debray adds.

BMW, Magna, and Innoviz
Among the major auto makers, Yole notes that Audi has integrated a lidar supplied by Valeo in its high-end A8 model since the end of 2017. It is now expanding this feature to other vehicles such as the Q8, A7 and A6 as an option, adds the analyst company.

Yole’s Pierrick Boulay says: “Lidar adoption is so on track and other carmakers have announced, or are expected to integrate this technology in future vehicles.” One example is BMW, which is partnering with parts giant Magna and the Israeli startup company Innoviz Technologies.

Innoviz recently announced a series C venture round worth $132 million on the back of the BMW deal, cash required to ramp production of its low-cost lidar units in advance of an anticipated roll-out of lidar-equipped BMWs in 2021.

Moves like that have prompted Yole to forecast that the total lidar market will “explode” in value to reach $6 billion by 2024, with automotive applications accounting for 70 per cent of that total.

“Highly and fully automated driving is about to become reality in the very near future,” believes Yole. “Driven by lower production costs and the emergence of new technologies, lidar is becoming a key component for automotive applications and we expect this market to explode, with a 64 per cent compound annual growth rate between 2018 and 2024.”

Market analysis
In a recent conference presentation entitled “Lidar: from space to roads”, Debray detailed more than $1 billion in private investments in lidar companies since 2016, with an increasing proportion related to those working on MEMS-based technologies.

Highlighting the broad array of lidar technologies – including flash, pulsed, phased array and frequency-modulated options – being deployed, and the various laser wavelengths utilized, Debray reports that the investments have been triggered by car makers moving to position themselves as providers of transportation services, rather than sellers of traditional vehicles.

Toyota encapsulated that shift in emphasis and future business model at the Consumer Electronics Show earlier this year when its CEO referred to the Japanese auto giant as a “mobility” company, rather than as a car company.

Despite the lidar investments, Debray and colleagues do not expect to see fully autonomous vehicles (as defined by “Level 5” advanced driver assistance systems terminology) on the roads until the mid-2030s.

Describing current autonomy levels as supporting “feet-off” driving, the Yole team expects to see “hands-off” operation from around 2027, followed by “eyes-off” driving in 2035, and “mind-off” driving following general acceptance of robot cars around a decade later.

What that might mean in terms of autonomous transportation is an anticipated rise in production amounting to three orders of magnitude, from today’s annual run-rate of around 4000 robotic vehicles. Yole’s analysts see that total rising to 44,000 units in 2021, 400,000 units in 2026, and 3.1 million units in 2032.

Translating that to lidar system demand, Debray predicts that unit shipments of automotive lidar systems will more than double each year to reach close to 4 million units in 2024 - implying that unit costs of the technology will be in the $1000 range by then.