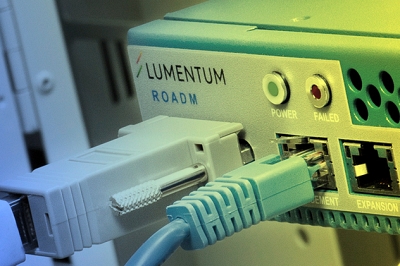 Lumentum has revealed plans to expand production of laser diodes and other photonic components, after reporting record annual sales since it became a standalone company.

The California-headquartered firm said it would double its indium phosphide (InP) wafer fabrication capacity over the next 18 months, and expand production of both gallium arsenide (GaAs) devices and reconfigurable optical add-drop multiplexer (ROADM) components.

With company operations having returned near to normal following the supply disruption caused by Covid-19, and the pandemic acting to accelerate demand for network bandwidth, Lumentum was able to post stronger results than had been expected in its latest quarter.

Favorable dynamics
At $368 million, sales in the three months ending June 27 were down 9 per cent on the same period last year, but above the range predicted by company executives back in May, when CEO Alan Lowe and colleagues had pencilled in a $90 million hit specifically relating to Covid-19.

The June quarter also marked the end of Lumentum’s latest fiscal year, during which it delivered revenues of $1.68 billion - up 7 per cent on the prior year, although that was partly due to the acquisition of Oclaro completed in late 2018.

Looking back on the five years since Lumentum was spun off from the JDSU business, Lowe observed: “Long-term market trends and industry dynamics are more favorable now than when we became a public company five years ago.

“The world is accelerating its shift to increasingly digital and virtual approaches to work, entertainment, education, healthcare, social interaction, and commerce.

“This is stressing the world's communication and cloud networks and driving the need for higher volumes of higher-performance optical devices.”

That trend is behind Lumentum’s decision to invest heavily in both production capacity and research and development efforts, with Lowe pointing out that the company’s datacom revenues are currently limited by its chip manufacturing capacity.

To meet the growing demand, Lumentum is also hiring new production staff and investing in back-end assembly and its test facilities.

“We believe the performance and capabilities provided by our indium phosphide laser chips and photonic integrated circuits [PICs] will be central to every telecom and datacom communication network, and perhaps - over time - increasingly in 3D sensing and lidar applications,” Lowe told an investor conference call discussing the latest financial results.

Commercial laser sales down
While demand is robust across the communications sector, the weaker macroeconomic environment elsewhere has impacted Lumentum’s “commercial lasers” unit, with sales of lasers down 20 per cent year-on-year in the June quarter, at $37.8 million.

However, Lowe said that this decline was less bad than had been expected, with weak demand for high-power fiber lasers somewhat offset by the need for other sources used in semiconductor manufacturing, where economic indicators have remained strong.

Commercial laser sales are expected to decline by another 25 per cent in the current quarter, reflecting general economic weakness outside of China.

Given that the Lumentum team is predicting total sales of between $430 million and $455 million, it means that sales of commercial lasers will represent only 6 per cent of company revenues.

• The buoyant outlook from the Lumentum team prompted a slight uptick in the company’s Nasdaq-listed stock price following the update. Closing at just under $90 on August 11, Lumentum now commands a market capitalization of $6.7 billion.

It also means that the firm has more than quadruped in value in the five years since it split from parent company JDSU - partly the result of significant acquisitions like Oclaro. Combined with a strong balance sheet, the stock price puts Lumentum in a position to make further acquisitions, should it wish to.