But the photonic component giant expects to benefit from an accelerated shift to digital working and virtual entertainment. 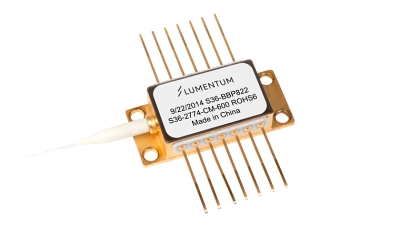 Photonics company Lumentum, one of the world’s major providers of laser diodes and optical subsystems, says its sales are set to fall significantly in the current quarter as a result of the global coronavirus pandemic.

Largely the result of supply disruptions that were greater than anticipated - notably in Malaysia, where a government lockdown hit production - the California-headquartered company expects to post revenues of between $325 million and $365 million in the three months ending June.

That compares with the figure of $403 million that Lumentum has just revealed for the March quarter, and $405 million in the June quarter of last year.

Silver lining
CEO Alan Lowe said that the pandemic had “dramatically impacted” the quarterly outlook, with the company estimating a virus-specific sales hit of around $90 million in the current quarter.

However, the revenue figure for the March quarter was within the range predicted by the firm three months ago, and Lowe sees a clear silver lining emerging as demand for greater bandwidth has a knock-on impact on providers of optical components critical to communications networks.

“While the Covid-19 pandemic is currently impacting our ability to satisfy strong customer demand for our communications products, we believe the world's experience with Covid-19 will accelerate the shift to increasingly digital and virtual approaches to work, education, healthcare, entertainment, social interaction, and commerce, creating even more opportunity for Lumentum over the long-term", said Lowe in a company announcement.

“The world’s experience of Covid-19 is changing how we do things in all aspects of work and life,” added the CEO in an investor conference call to discuss the results and outlook.

Expanding on that, Lowe said: “This accelerated shift will stress the world’s communications and cloud networks, and should therefore drive the need for high volumes of high-performance optical devices.”

As well as the obvious impact on communications products, the CEO said that its optical devices and lasers for 3D sensing will be in greater demand, thanks to the twin needs for greater security and autonomous hardware used to create and consume digital content.

3D sensing ramp
Evidence of the level of demand from the communications sector includes a 10 per cent sequential increase in bookings for telecom and datacom products, and a very strong book-to-bill ratio of 1.3.

Outside of communications, Lumentum reported a sharp jump in sales from its industrial and consumer division - largely the result of a ramp in laser production for 3D sensing and lidar applications in smart phone handsets.

However, that demand is now expected to fall on concerns of lower consumer spending and wider supply chain challenges for handset makers, while a global slowdown in industrial production is expected to see sales of high-power fiber lasers decline.

Lumentum said that its sales in the latest quarter were hit around $10 million more than initially expected by the pandemic, largely because of the direct impact on its operations in Malaysia following a government lockdown implemented there March 16.

“As the outbreak spread outside of China late in the quarter, we experienced supply disruptions in excess of our prior assumptions,” admitted the firm. “The supply of certain products produced in Malaysia was significantly disrupted as the Malaysian government issued a movement control order."

There was further impact from limitations in component supply from third parties, said Lumentum, including at its Shenzhen facility following the Chinese new year break.

However, that situation is now changing rapidly. "As we provide an essential service under the order, we have been able to slowly increase production in Malaysia from zero when the movement control order was issued, and expect to reach near 100 per cent production levels in the coming weeks,” stated the firm.

Lumentum also stressed the various safety measures that it had implemented, including home working programs for nearly all of its non-manufacturing employees, alongside social distancing protocols and enhanced use of personal protective equipment at manufacturing sites.

Lumentum stock price: back close to an all-time high

Lumentum was also among the very first participants to withdraw from major trade shows at the onset of the pandemic.

• Following the update, Lumentum’s stock price rose in value by around 5 per cent. Trading at around $82 on the Nasdaq shortly after the May 5 update, the company’s shares have returned close to the all-time high valuations seen ahead of the Covid-19 outbreak.

And with cash and short-term investments totaling nearly $1.5 billion on its balance sheet, and convertible loan notes of the same value that are not sue for repayment until 2024, Lumentum looks better placed than most to weather the immediate impact of the pandemic.