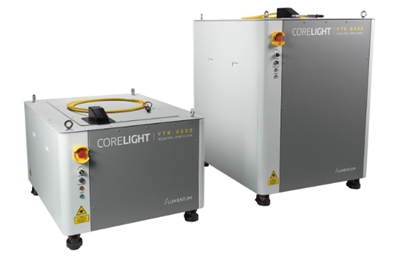 Shares in the photonic component and laser manufacturer Lumentum have risen in value sharply, after the Californian company bucked the recent trend with solid financial results and a confident outlook.

Although sales in the June quarter - the final three months of the firm’s latest fiscal year - were down sequentially, CEO Alan Lowe said that Lumentum had enhanced its leadership position in all its key sectors, with annual sales for its commercial lasers business hitting record levels in a “down” market.

At $405 million, sales in the three months ending June 29 were up more than 34 per cent on the prior year – the uptick largely reflecting the Oclaro acquisition that was completed in December 2018.

And although for the full year Lumentum swung to a net loss of $26 million, that was largely the result of accounting charges related to the Oclaro deal. Total sales for the year jumped 25 per cent to $1.57 billion, with laser sales specifically rising 4 per cent - to a new record level of $195 million.

Scale and synergies
“With market-leading positions in the growing telecom and 3D sensing markets, a datacom strategy that profitably benefits from growth in cloud and 5G wireless network deployments, a commercial lasers business that bucked market trends and grew to record levels, and a more profitable business model driven by the increased scale and synergies from the Oclaro acquisition, we are well positioned for fiscal 2020 and beyond,” Lowe said.

The CEO is now anticipating an additional $40 million in annual cost savings related to the Oclaro merger, taking total “synergies” associated with the deal to $100 million.

Commenting on the degree of consolidation now being seen across the industry, Lowe added that there was “perhaps more to come” in terms of mergers and acquisitions, as participants increasingly recognized the need for scale.

Lumentum’s own scale appears to be paying dividends in the 3D sensing sector, for which it provides VCSELs used in Apple’s face-scanning phone security feature. Lowe pointed out that with nearly half a billion such devices now shipped into the fast-growing application area, Lumentum has experience and a competitive advantage that is hard for others to match.

With 3D sensing technologies now migrating into Android phones and other applications including photography and augmented and virtual reality (AR/VR) platforms, that advantage looks to be crucial – even though Lowe recognizes the increasing competition.

“We’ve had two years of extremely high market share,” he said. “[But] our competitors will figure it out eventually.”

Fiber laser bounce
Another strong area for the company currently is fiber lasers – where sales, dominated by Lumentum’s close ties with the Japanese machine tool vendor Amada, doubled in the latest fiscal year. Greater traction with other fiber laser customers is anticipated in 2020, notwithstanding the wider headwinds facing the industry.

That is in stark contrast to recent experiences for the likes of IPG Photonics, nLight, and Coherent, where trade tensions and price competition in China have combined to squeeze the market.

Nowhere have those tensions been more evident than in dealings with the Chinese telecommunications giant Huawei – an important customer for Lumentum. But since late May, when the US firm was forced to stop shipments to Huawei in accordance with the US Department of Commerce directive, Lowe and colleagues have been able to adapt their business and processes such that shipments of many Huawei-bound products have now resumed.

Even if future business with Huawei, and in China more widely, remains difficult to predict, Lumentum is now capacity-constrained in certain telecommunications product lines that are in high demand for 5G network and hyperscale data center build-outs.

As a result of that and a seasonal uptick in shipments of 3D sensing devices needed for new smart phone designs ramping for the 2019 holiday season, Lowe and colleagues predict that quarterly sales will jump to around $445 million in the current quarter.

That confident outlook appeared to prompt close to a 10 per cent rise in Lumentum’s stock in early trading August 8. At just under $59 on the Nasdaq, the stock has returned close to long-terms highs, and is equivalent to a market capitalization of around $5 billion.

• During an investor conference call to discuss the latest financial results, the Lumentum executive team paid tribute to Martin Kaplan, the chairman of the company's board of directors, who died recently.

"Marty served our Board with great passion and commitment and brought incredible business acumen to the company. He was a mentor and a wise advisor but also so much more, a friend and truly amazing human being who will be greatly missed," said CEO Lowe. "On behalf of Lumentum, we send the Kaplan family our most heartfelt condolences and sympathy."