US photonics and metrology company confirms identities of the two businesses it will split into later this year. 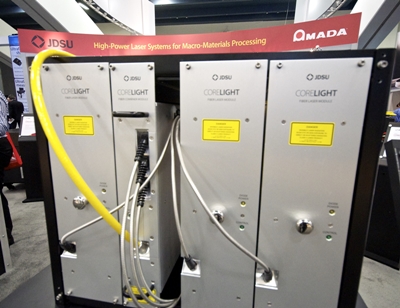 JDSU has revealed that, following its planned split into two separate commercial entities, its optical communications and lasers division is to be called “Lumentum”.

The new company will largely comprise JDSU’s optical components and subsystems for telecommunications and data center applications, but will still be relatively diverse. It will also include JDSU’s growing portfolio of high-power fiber lasers – several of which were revealed at the recent SPIE Photonics West exhibition – as well as its scientific laser and 3-D sensing technologies.

Taking the helm at the new company will be Alan Lowe, who is currently head of JDSU’s “communications and commercial optics” (CCOP) division. The company said that it would apply to the Nasdaq exchange to list Lumentum under the ticker name “LITE”.

“Lumentum will be a global leader in optical components and subsystems for the telecommunications market, with high growth opportunities in data communications, driven by the rapid expansion of cloud networking and data center infrastructure, and in high-performance lasers for both macro and micro materials processing applications,” announced JDSU.

“With its long-standing reputation for optical innovation and quality, Lumentum will also be focused on growing its 3D sensing and commercial lasers business and expanding into other market segments that can benefit from optical and laser technologies.”

Following the split, which is expected to be complete by the end of September, JDSU’s other business lines will be grouped together under the name “Viavi Solutions”. It will largely comprise the firm’s range of monitoring equipment for both optical and wireless networks, but will also include JDSU’s optical security and performance (OSP) division, which includes anti-counterfeiting technology for banknotes.

Current JDSU boss Tom Waechter will continue as CEO of Viavi after the two new companies are created.

New lasers debut at Photonics West
In the company’s latest financial results, for the quarter that ended December 27, the business that will become “Lumentum” accounted for $207.1 million in sales – just under half the total revenue figure of $437.1 million.

Of the remaining $230 million sales, the OSP division accounted for $50.6 million, with network and service monitoring contributing the balance of $179.4 million.

That total figure represented a slight year-over-year decline, and along with higher spending on research and development pulled JDSU to a quarterly net loss of $25.1 million.

The relative complexity of the current JDSU business is partly a hangover from the acquisition spree that it embarked upon during the dot-com and telecommunications bubble period of the late 1990s and early 2000s, when its executives took advantage of the company’s spiking market valuation.

While that initial spree focused mostly on the acquisition of photonic component and subsystem companies, JDSU has more recently migrated into the network and service monitoring offerings that now make up the largest single chunk of its sales.

However, a year ago it also purchased the Zurich-based ultrafast laser specialist Time Bandwidth Products, with an eye on emerging laser micromachining applications. And at Photonics West earlier this month the company confirmed its intentions for the fast-growing industrial fiber laser sector, with the launch of a new 6.3 kilowatt fiber laser engine.

That was one of many laser technologies making a debut at the San Francisco show, with JDSU also launching a 4 kilowatt direct-diode laser system, and a Q-switched ultraviolet source capable of delivering millijoule-scale pulses at 355 nm with an average output power of 40 W.