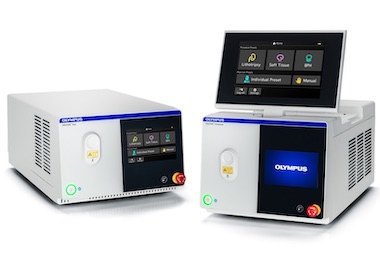 Olympus has launched a new laser platform intended for soft tissue applications and for lithotripsy, the destruction of hard masses within the body including in particular kidney stones.

The Soltive system is based on thulium laser technology, and said by Olympus to mark the introduction of thulium fiber lasers into the medical world.

"The thulium fiber laser is a game changer," commented Bodo Knudsen of Ohio State University, the first clinical user of the Soltive platform.

"Besides being faster, this laser dusts stones into very fine particles that more easily wash out during the procedure, which is a significant benefit for patients. When kidney stone fragments don't clear during or after the lithotripsy procedure, they can potentially grow into bigger stones that lead to future stone related events."

According to Olympus, its in-house testing on synthetic kidney stones has shown that a thulium laser can dust stones in half the time it takes other laser systems. In early cases, the laser system has been shown to have virtually no retropulsion, or migration of the stone during treatment, and to offer precise soft tissue cutting with visibly improved capability of hemostasis, the control of blood flow when needed.

Thulium sources for medical applications have been a focus of research for some time, with IPG Photonics indicating in 2017 that it had commenced working with a tier-one provider to "qualify and introduce revolutionary new thulium fiber laser technology for prostate and stone removal operations."

In last month's announcement of quarterly financial results, IPG said that sales of medical lasers had ramped to a best-ever $10 million in the March quarter, assisted by the diversification into thulium fiber lasers.

The first single-frequency thulium-doped DFB fiber laser was developed back in 2004, spurred by the relatively broad span of thulium's potential emission spectrum compared to ytterbium and erbium-doped fibers.

For urology applications holmium:YAG lasers have become widely adopted, due to their particular suitability for use with flexible uretroscopes and ability to be used for soft tissue procedures in addition to treating kidney stones, which can help to offset the equipment costs.

A 2019 survey by the World Journal of Urology compared thulium with the established holmium:YAG sources, and concluded that the newer technology offered several potential advantages.

Significantly, the WJU noted that thulium sources can be optimized to emit at 1940 nanometers, very close to a near-IR absorption peak of liquid water. This allows the laser to act upon the water content of kidney stones more efficiently than holmium:YAG sources, which usually emit at 2120 nanometers and act less directly on a weaker absorption peak of water at 2940 nanometers.

The WJU survey concluded that the thulium fiber laser could offer "four-fold higher absorption coefficient in water, smaller operating laser fibers (50 to 150 micron core diameter), lower energy per pulse (as low as 0.025 J), and higher maximal pulse repetition rate (up to 2000 Hz)." Taken together these factors suggest a 1.5 to 4 times faster ablation rate for kidney stones, compared to holmium:YAG.

The Soltive platform can now bring these advantages to clinicians, according to Olympus, which noted that the platform also generates 50 percent less noise than a Holmium YAG system when measured at comparable settings, a significant clinical consideration.

"With the improved dusting, cutting and hemostasis performance, the Soltive laser system is a significant leap forward in laser technology that will assist urologists in achieving better outcomes," said Randy Clark of Olympus Medical Systems Group.