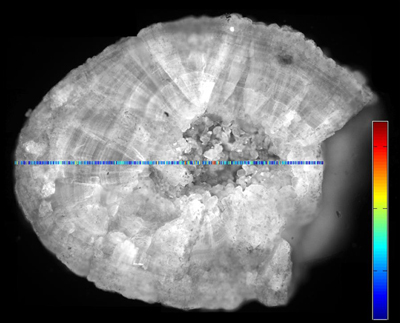 Kidney stones rank among the most common diseases with at least 9% of Americans believed to suffer from them. But their recurrence might be prevented with the right postoperative care. For this to be effective, the chemical composition of the stones needs to be known. Researchers at the Fraunhofer Institute for Physical Measurement Technology (IPM) are developing a Raman-based system to rapidly analyze these painful but treatable urinary stones immediately after the surgical procedure.

An increasing number of citizens in western European countries are affected by kidney stone disease. The number of new cases has tripled in the past 10 years, according to the Fraunhofer IPM. Kidney stones are often no larger than a grain of rice, yet some can grow to a diameter of several centimeters, which can block the ureter, causing “colic” pain in the body flank. If it cannot be dissolved, the kidney stone is usually treated using extracorporeal shock-wave therapy or by applying minimally-invasive endoscopic treatment.

The IPM says that scientific studies have shown that new stone formation can be reduced by 50% if individualized follow-up care and proper metaphylaxis measures are offered to the patient. The recommendations regarding dietary habits or the use of particular medication strategies are based on the knowledge of the stone composition.

In collaboration with an industrial partner and the Division of Urotechnology, at the University Medical Center Freiburg, Germany, researchers at the Fraunhofer IPM are developing a novel Raman spectroscopy based diagnostic system for rapid and automated analysis of kidney stones. This approach is said to be significantly improving patient follow-up care after stone treatment.

Dr. Arkadiusz Miernik at Fraunhofer IPM commented, “Only a small number of kidney stone patients receive a comprehensive consultation and follow-up after they have been treated. This may be because conventional stone analysis technologies such as infrared spectroscopy are costly and time-consuming, including preparation of stone samples. Analysis can also only be performed in a dedicated laboratory. Since only a few centers offer this type of analysis, it can take up to three weeks to receive results.

“From the clinical point of view, we need individualized approaches and these must include results of a compositional analysis of the stone. This allows us to evaluate the individual risk of disease recurrence and detect potential metabolic abnormalities,” says Miernik.

Miernik and his team employ a Raman spectroscopy-based technique, which allows them to rapidly characterize and conclusively identify specific stone types. Composition can vary from calcium oxalate, through calcium phosphate, uric acid to struvite. The Raman method utilizes a characteristic spectrum in the visible wavelength range of the examined sample called a chemical fingerprint.

Miernik added, “These samples are illuminated using laser light. About 1% of the photons are reflected back in a different wave spectrum, which is specific to the sample. We record these signals in a database.” Researchers then use dedicated software to filter out the fluorescent background occurring during Raman spectroscopy and identify the stone type. This rapid method employs relatively inexpensive optical components, works on wet, unprepared samples and significantly reduces the time necessary to identify the stone.

A demonstration system, including the hardware and software required for stone analysis developed by the Fraunhofer IPM researchers, already exists as a prototype. This prototype must first be made more compact before it is ready for the market. A unique feature of the system is its spectral database. An information index has been built up of data on the nine pure substances making up 99 percent of urinary stones.

During its development, the researchers examined nearly 160 kidney stone samples in setting up the software during the first validation phase. Moreover, the results were confirmed after a conventional infrared-based analysis in a reference laboratory. “Once the complete system is ready for clinical use, the physician or urologist will be able to examine stone samples directly after surgical intervention on his own, thus increasing the quality of patients’ care substantially,” concluded Miernik.