IPG confirms billion-dollar year with look to the future 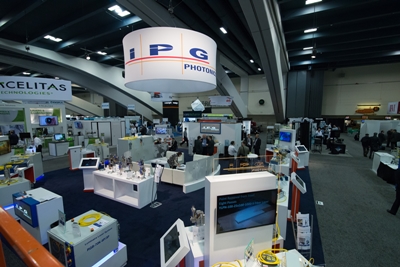 Fiber laser specialist IPG Photonics has confirmed that its annual sales topped $1 billion for the first time in 2016, with the Nasdaq-listed company reporting revenue growth of 12 per cent over 2015 – despite the impact of the strong US dollar.

The finalized figures saw IPG post a net income of $260.8 million for the year, on sales that came in at $6 million above the $1 billion mark.

‘Enormous’ medical opportunity
Looking back over the decade since the company that he founded listed on the US stock exchange, CEO Valentin Gapontsev said he was optimistic that the next ten years offered plenty more opportunity for growth.

“Last year demonstrated that we are still far away from saturation in [this] market sector, as we sold nearly 30 per cent more optical power than in 2015,” he told an investor conference call, adding: “Even at our current size, IPG has a very significant opportunity to expand within our addressable markets.”

While in 2016 it was booming sales of high-output lasers for industrial applications that once again propelled IPG’s sales and profitability, Gapontsev pointed to the medical sector as one with “enormous potential” for the firm to grow further.

“We continue to make good progress in the medical and advanced applications markets,” said the CEO. “In the dental, urology, surgical, and cosmetic fields, we are entering into partnerships with major medical companies to leverage our technology and manufacturing scale and their distribution.”

Examples include a deal with dental laser firm Biolase, whose latest “Epic Pro” system, based around an IPG source, has gained US Food & Drug Administration (FDA) clearance.

“In the urology application, we are working together with a tier-one provider to qualify and introduce revolutionary new thulium fiber laser technology for prostate and stone removal operations,” added Gapontsev. “Our other target is the implementation of fiber lasers in manufacturing of medical devices like stents, pacemakers, implantable defibrillators, and so on.”

Systems selling
Digital cinema is another, if ultimately smaller, target area, and at the SPIE Photonics West trade exhibition earlier this month IPG told optics.org that its six-laser units were now installed an unspecified number of cinemas in Europe and the US, with operators evaluating the technology’s impact with audiences.

One key customer is NEC, whose digital cinema projector features the IPG technology, with Gapontsev declaring himself “encouraged” by discussions with other equipment providers.

Adding some detail to the broader picture, IPG’s CFO Tim Mammen noted that sales in the closing quarter of 2016 jumped 25 per cent year-on-year to a record-breaking $280 million, with shipments of high-power lasers largely responsible.

Geographically, that rise was driven by sales to China and Europe, with the latter partly resulting from stronger demand for both lasers and laser systems for cutting applications in Russia.

Gapontsev pointed out that systems sales were now becoming a significant chunk of IPG’s overall revenues, with more than 100 sold during 2016.

Looking to 2017, Mammen said that IPG was expecting to deliver another strong growth year, predicting that sales would jump by between 10 per cent and 14 per cent, although that total would be higher again if it was not for the current strength of the US dollar. 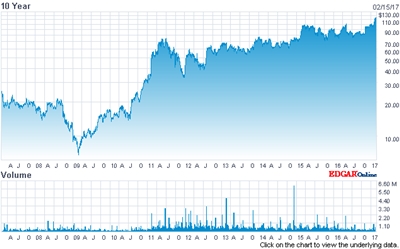 Asked about the level of demand for IPG’s high-power sources in the emerging area of high-power laser weapons, Mammen said that although 2017 has previously been earmarked as the year in which these might accelerate, there was no clear sign of that happening yet.

“We continue to get meaningful orders that are still primarily targeted, we think, at the research and development side,” said the CFO. IPG’s lasers have featured in demonstrator systems developed by the German subsidiary of European arms firm MBDA Systems in the past.

• Like several of its peers and rivals, IPG's stock price is currently trading close to record-highs. It appeared to be largely unaffected by the firm's 2017 outlook, and closed at just over $117 on February 14 - slightly below the all-time high reached earlier the same say but still equivalent to a market capitalization now in excess of $6 billion.