Artificial intelligence, in combination with sensing and robotic innovations, is enhancing the US military’s warfighting capabilities. 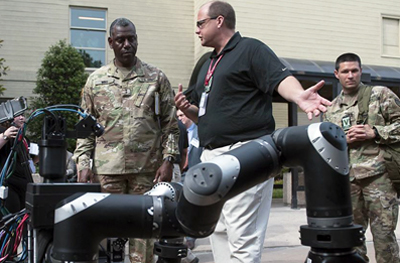 His presentation abstract sets the scene: “The future operational environment will be contested in all domains in an increasingly lethal and expanded battlefield, conducted in complex environments against challenged deterrence.

“In order to prevail in the Multi-Domain Operations phases of dis-integration, exploitation, and re-entry to competition, the US Army will need to employ teams of highly-dispersed warfighters and agents, both robotic and software, including Robotic Combat Vehicles.”

The latest military thinking is that for human soldiers to operate as a high-functioning team, they will need to be able to coordinate with robot RCVs as if they were teammates, says Young. “This means as fellow soldiers rather than just tools,” Young emphasizes.

His team at the Army Research Laboratory, managed by Dr John Fossaceca, considers that earlier generations of tele-operated robots were only capable of performing limited tasks. Now they are working on the Artificial Intelligence for Maneuver and Mobility Essential Research Project, which aims to revolutionize AI-enabled systems for autonomous maneuver that can rapidly learn, adapt, reason, and act in MDO. The program is divided into two main Lines of Effort (LoE): Mobility, and Context-Aware Decision Making. 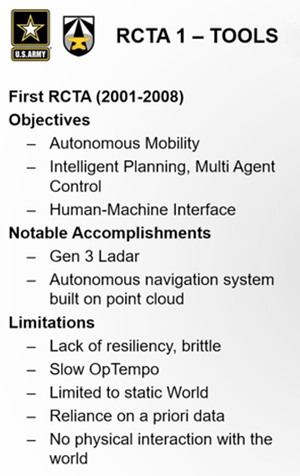 The Mobility LoE is focused on developing resilient autonomous off-road navigation for combat vehicles at operational speed that can autonomously move to a position of advantage. The CADM LoE is focused on enabling autonomous systems to reason about the environment for scene understanding with the ability to incorporate multiple sources of information and quantify uncertainty.

Ultimately, the Mobility and CADM LoE's will culminate in autonomous maneuver; the ability of unmanned vehicles to autonomously maneuver on the ground against a near-peer adversary within the Multi-Domain Operations battlespace. This capability will enable autonomous vehicles to team with soldiers more seamlessly; conduct reconnaissance to develop the enemy situation at standoff; and enabling the next generation of combat vehicles to win against a near-peer adversary.

Young states, “We need robotic vehicles that can conduct independent maneuver to be able to isolate and defeat enemy maneuver forces and to secure terrain and consolidate gains. In order to achieve this, we believe that we need combat vehicles that can rapidly learn, adapt and reason faster than an adversary and fight and win in congested and austere environments. So we are focusing on two primary domains: autonomous mobility and context-aware decision-making.”

He then gives some background to the latest program of research and objectives by explaining how the Army got to where it is today. The Army Research Laboratory’s Robotics Collaborative Technology Alliance (RCTA) had a stage 1 program between 2001-2008, which Young says, “did a really good job of focusing on solving the problem of autonomous mobility, and intelligent planning and multi-agent control.” But there was still much work to towards robot autonomy, reliability, speed and the development of what real soldiers might consider to be a “team mate”.

He continues, “Some of the major lessons learned from the first CTA were the lack of resiliency or the systems were too brittle, they were clearly too slow, and lacked the operational tempo. They didn’t have the physical interaction with the world, so they weren’t able to manipulate it and it focused on a largely static world. They were heavily reliant on a priori data and focused on terrains and trails.” 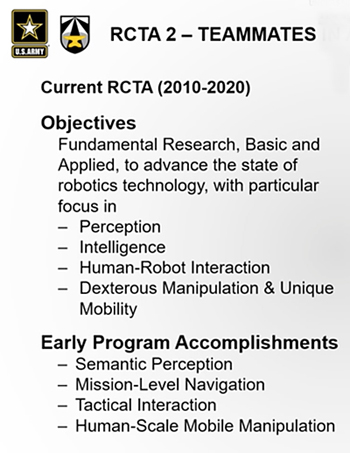 As this program ended and in the second RCTA 2 began, Young’s group moved from thinking of robots as tools and towards more as teammates. We want the RCVs to be able to think of the world in the way that humans do. And we needed to do this in unstructured environments,” he explains.

The practical impact of this approach is that it would enable solders to demonstrate a desired behavior – such as how to behave when moving through either a peaceful market where a robot can meet non-hostile civilians, or in a combat environment with adversaries that need to be avoided, where an operator might want to direct the robot over a different route.

At this point Young plays a short video featuring collaborator Martial Hebert, a robotics expert from Carnegie Mellon University. Hebert says, “A large part of what we do, even though it’s about robotics, does not have to do with robots. It’s to do with people, interactions involving people and understanding their behavior. This is something that we could not do just a few years ago. With the new techniques, the data and far greater availability of computing we can learn far more about behavior, more about intent and can have more elaborate decision-making. This has transformed the field.”

Young then poses the question, where do we go from here? The robot-capability issues that still need further work include the following: robustness; unstructured static and dynamic environments; natural language grounding and architecture for an intelligent world model; contextual inference; dexterous mobile manipulation; and mobility in complex terrain. 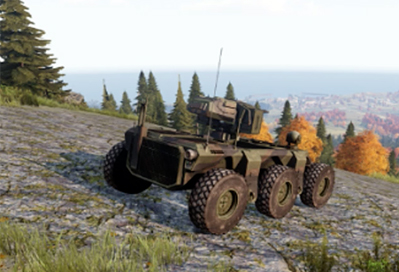 “The ARL has set up this central research called program called AI for Maneuver and Mobility. This has the long term objectives of developing combat vehicles that can rapidly learn, adapt and reason faster than an adversary; fight and win in a contested, austere environment ; and provide force reduction through self learning,” Young says.

He adds, “Essentially, we need more data but we also need techniques that do not require so much a priori data. And of course we are still way to slow. So our program is focusing on narrow AI techniques, using natural language to interact with the systems, to do tactical teaming and to be able to address these issues of speed, brittleness and dependence on a lot of data.”

He concludes with an invitation to the research community to help provide solutions to the ARL’s robot challenges: “The disruption that we are trying to create in the research community is we want to be able to reduce soldier cognitive burden. Currently, soldiers are depending on tele-operating these robotic systems, or depending on tethers, and we want to reduce their cognitive burden to be able to operate the systems without having to focus on them all the time.

“We also want to understand the situation – what’s the enemy situation – and be able to conduct missions to develop enemy situations at stand off and provide options for a commander to be executable in the MDO concept.”