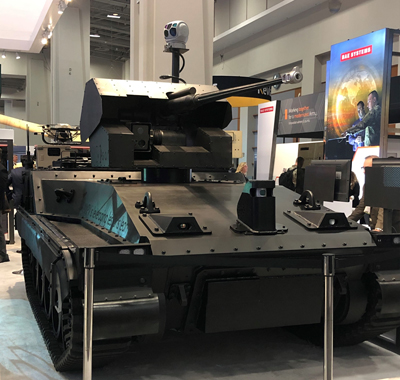 The tank-like vehicle depends on a range of sensors and optical systems for operation and control. BAE says the RTD, “represents a leap-ahead advancement for unmanned combat vehicles today.”

The defense systems developer adds that the RTD prototype “showcases advanced capabilities and is adaptable for future weapon systems, sensors and other payloads.”

The vehicle features autonomous mobility to help keep soldiers out of harm’s way, a suite of sensors for 360-degree situational awareness and surveillance, a Hybrid Electric Drive for fuel efficiency, a 30 mm remote weapons station, and a small legged robot for reconnaissance missions.

“Its advanced optics, electrical infrastructure, and software that have been integrated onto this robust chassis provide the foundation for game-changing battlefield capability. BAE Systems has built this demonstrator to help us determine the best way to mitigate risk for our soldiers while increasing their lethality.”

The RTD prototype is said to “leverage decades of BAE Systems expertise in the design and development of combat vehicles, as well as advanced electronic systems.” Visitors to the AUSA expo can see the RTD on BAE Systems’s booth (number 6343) in the Walter E. Washington Convention Center through October 16th.