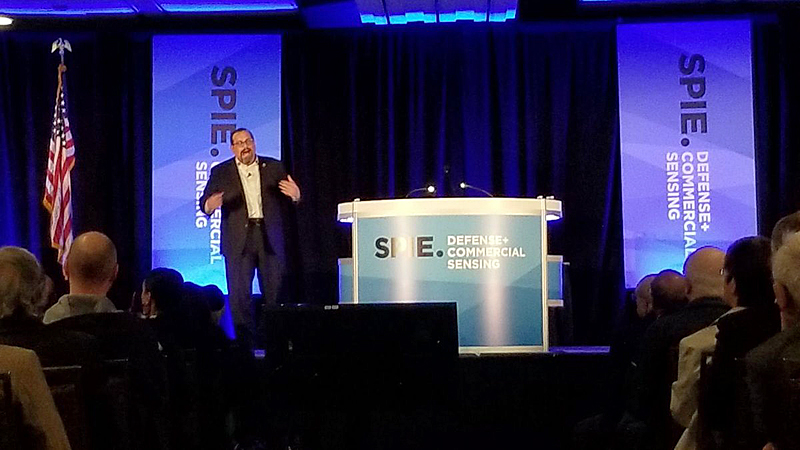 US Army Research Lab⁩'s Dr Philip Perconti opens the DCS 2019 plenary presentations with a presentation on future battlefield technologies, and the role of photonics.

Having a host of new “War Things,” as yet unimagined is one way, maybe the best way, to avoid another war, Philip Perconti, the US Army Research Lab director, told a packed audience at the SPIE Defense & Commercial Sensing (DCS) conference on Monday. By War Things, Perconti meant in the style of the Internet of Things, and that will require, he said, unprecedented collaboration with universities and others.

A central theme of Perconti’s presentation was his “open campus initiative,” which draws in top academics “to collaborate across the ecosystem to build a partnership to do research.”

The ARL has opened four regional US research labs, forming an ecosystem that is already solving problems, such as ubiquitous sensing. Such sensors must be “collectively intelligent, collaborative and adaptive for the US Army.” Perconti spoke to a standing, and carpet-sitting, crowd in the main meeting hall of the Baltimore Convention Center on Monday at the first plenary of the 2019 DCS meeting.

“There’s a lot of change going on,” he said. “There’s a new vision of the US Army, and the essence of it is having by 2028 an Army ready to fight a joint fight.” This will require modernization and a new structure for the ARL’s 2,000 employees, with a $1 billion budget.

One result will be something he calls the “Internet of Battlefield Things,” in short, the means to “live with ambiguity and chaos,” fighting multi-domain operations. Disruption within Army research is vital, even when “you have the best army in the world,” he added.

The Army’s futures command is putting together concepts of “how we buy things and what we buy. Now, let’s get a 4-Star General to run the acquisition process.” The US Futures & Concepts Center has three sub-elements: tackling combat capabilities; a development command; and a combat systems center. “If you want to modernize an army,” he said, “then you have to understand cross-function teams, aimed at 2028.”

New research will focus on four war-fighting domains: land, sea, air, space, as well as the new field of cyberspace. “Multi-domain command and control is our biggest problem in this environment,” Perconti said. “It seems almost impossible. This is where you’ll see a lot of research opportunities.”

Battlefields will be places for a new resilient network of sensors and actuators, along with robots, all forming “a combat cloud of resources you can bring to bear,” Perconti told the audience.

To achieve fast reconfigurability of “heterogenous agents,” in changing topology, the new Army networks “must be aware of attacks from a machine-learning perspective. And in an environment that we don’t necessarily own,” he said.

As the bandwidth degrades in a battlefield, Perconti asked, “Can you partition the algorithm to send back a minimum amount of information, a cloud or anything in the network that can be used to derive a decision as soon as possible? When you understand partition, that allows you to make trades to solve bandwidth constraints.”

Concluding the plenary, he made what he called a “shameless plug” to any professors and grad students in his audience for opportunities in artificial intelligence. His list of funding opportunities, he said “is your entry point to the Army research office.”

“You can spend your career with your head down, just thinking physics, or you can try to understand why you are trying to answer those questions,” said Perconti, who has degrees in electrical and computer engineering from George Mason University, Johns Hopkins University, and the George Washington University. “It’s going to take us all to solve these problems.”