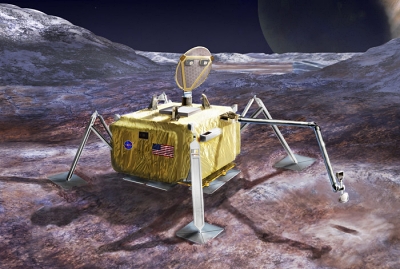 Life on Venus or Europa?

Engineers at Los Alamos National Laboratory (LANL) are hoping to send a new photonics-based instrument to Venus to seek out organic compounds that may indicate the presence of extra-terrestrial life.

Called the “OrganiCam”, the instrument uses a combination of fluorescence lifetime imaging and Raman spectroscopy to identify organic molecules, with a sensitivity in the parts-per-billion range.

LANL’s director of global security programs, Andy Erickson, discussed the development during a plenary talk for this week’s SPIE Defense and Commercial Sensing (DCS) Digital Forum - the virtual event that has replaced the scheduled DCS conference and exhibition in Anaheim, California.

Erickson said in his virtual presentation: “Hopefully, this summer, we'll be launching SuperCam to Mars, which is the follow on to ChemCam. And we're looking forward to launching a new system, called OrganiCam, which hopefully will be able to explore aspects of Venus.”

While the ChemCam used by NASA’s Curiosity rover vehicle relies on laser-induced breakdown spectroscopy (LIBS) to analyze minerals, the SuperCam - currently still scheduled for launch this July - adds Raman, fluorescence, and infrared spectroscopy to the mix.

“This continues our collaboration with the French Space Agency, and hopefully, will provide a far greater understanding of the makeup of the Martian surface,” commented Erickson, adding that the LANL team was very excited about the potential mission to Venus with OrganiCam.

Lifetime imaging
Showing a schematic diagram of the prototype instrument, he said that the combination of fluorescence lifetime imaging with Raman would yield even more analytical detail, including the ability to uniquely identify organic materials.

“As you can see, it provides images showing organic materials at abundances down to the part-per-billion level, and it can distinguish between organic and inorganic fluorescence by using very fast, 100-nanosecond time resolution,” Erickson said, explaining how the shutter system can distinguish between organic fluorescence and mineral luminescence because the latter takes longer to appear after laser excitation.

“It leverages off of our SuperCam Mars Rover instrument and adds additional capabilities. Hopefully, this system will be very useful in looking at organic materials and in a relatively small package has numerous applications.”

According to a recent release from LANL, the “first-of-its-kind” instrument could also be used in certain other extreme and hostile environments - for example to help assessment after a nuclear reactor accident, or contaminant detection in medical facilities.

But the team is most excited about the potential for detecting organic material, a strong indicator for life, on a different planet or planetary moon. “OrganiCam is the first lightweight instrument built for space that uses time-resolved fluorescence imaging for organics,” stated the lab earlier this year. “It is incredibly sensitive but it can distinguish between mineral fluorescence and biofluorescence using its gated detector.”

The high-speed fluorescence aspect that sets the new instrument apart relies on a pulsed green laser that is expanded through a diffuser when used in fluorescence mode. According to a paper prepared by the OrganiCam development team for this year’s Lunar and Planetary Science Conference, the diffuser is removed from the beam path for Raman mode, to provide the much higher illumination needed to obtain the weaker Raman scattering signals.

Plug-and-play hyperspectral
Detailing the current status of the effort, the team wrote in the paper: “As of early 2020, the design is complete and assembly has begun. Further testing in the spring of 2020 should validate the requirements.”

During a plenary talk covering a huge range of topics and techniques in remote sensing and advanced imaging, Erickson also detailed a plug-and-play approach using MEMS components and spatial light modulators that can transform conventional imagers into hyperspectral systems.

“The basic idea is that you collect an image,” he said. “You use spectral selective elements, such as gratings and prisms to break that image into colors. You project those onto a steerable micromirror array - basically, a spatial light modulator that's used in things like LED projectors.

“And then using advanced software algorithms, you can select which colors on which pixels go where, so you can build a real time hyperspectral imager using a conventional camera.”

Erickson suggested that the approach would prove to be a very powerful way to reduce communications and data processing requirements, while adding functionality to existing platforms in a relatively inexpensive way.

He added: “The system is small enough to be handheld, very operator friendly, and can use sort of standard commercial front-end optics and existing capabilities and processing to provide real-time answers and actionable information.”