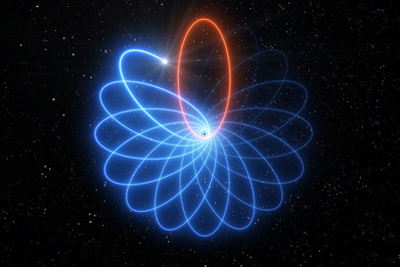 Observations made with the European Southern Observatory's (ESO) Very Large Telescope (VLT) have revealed for the first time that a star orbiting the supermassive black hole at the centre of the Milky Way moves precisely as predicted by Einstein’s general theory of relativity. The star's orbit is shaped like a rosette and not like an ellipse as predicted by Newton's theory of gravity. This long-sought-after result was made possible by increasingly precise measurements over nearly 30 years.

“Einstein’s General Relativity predicts that bound orbits of one object around another are not closed, as in Newtonian Gravity, but precess forwards in the plane of motion,” commented Reinhard Genzel, Director at the Max Planck Institute for Extraterrestrial Physics in Garching, Germany and the architect of the 30-year-long programme that led to this result.

“This famous effect — first seen in the orbit of the planet Mercury around the Sun — was the first evidence in favor of General Relativity. One hundred years later we have now detected the same effect in the motion of a star orbiting the compact radio source Sagittarius A* at the centre of the Milky Way. This observation strengthens the evidence that Sagittarius A* must be a supermassive black hole of 4 million times the mass of the Sun.”

Located 26,000 light-years from the Sun, Sagittarius A* and the dense cluster of stars around it provide what the scientists call “a unique laboratory for testing physics in an otherwise unexplored and extreme regime of gravity”. One of the stars, S2, sweeps in towards the supermassive black hole to a closest distance less than 20 billion km, making it one of the closest stars ever found in orbit around the massive giant.

“After following the star in its orbit for over two and a half decades, our exquisite measurements robustly detect S2’s Schwarzschild precession in its path around Sagittarius A*,” said Stefan Gillessen, also of the MPE, who led the analysis of the measurements. The work is published in Astronomy & Astrophysics.

Most stars and planets have a non-circular orbit and therefore move closer to and further away from the object they are rotating around. S2’s orbit precesses, meaning that the location of its closest point to the supermassive black hole changes with each turn, such that the next orbit is rotated with regard to the previous one, creating a rosette shape.

General Relativity provides a precise prediction of how much its orbit changes and the latest measurements from this research exactly match the theory. This effect, known as Schwarzschild precession, had never before been measured for a star around a supermassive black hole. 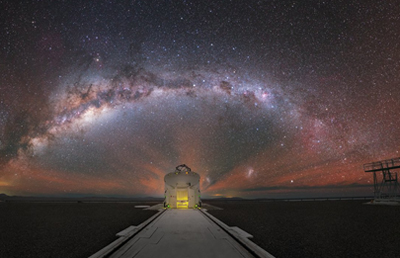 The Milky Way stretched out behind one of the Auxiliary Telescopes of ESO's VLT.

This study using ESO’s VLT is helping scientists to learn more about the vicinity of the supermassive black hole at the centre of our galaxy. “Because the S2 measurements follow General Relativity so well, we can set stringent limits on how much invisible material, such as distributed dark matter or possible smaller black holes, is present around Sagittarius A*. This is of great interest for understanding the formation and evolution of supermassive black holes,” commented Guy Perrin and Karine Perraut, the French lead scientists of the project.

The result is the culmination of 27 years of observations of the S2 star using a fleet of instruments at ESO’s VLT, located in the Atacama Desert in Chile. The number of data points marking the star’s position and velocity attests to the thoroughness and accuracy of the new research: the team made over 330 measurements in total, using the GRAVITY, SINFONI and NACO instruments. Because S2 takes years to orbit the supermassive black hole, it was crucial to follow the star for close to three decades, to unravel the intricacies of its orbital movement.

The research was conducted by an international team led by Frank Eisenhauer of the MPE with collaborators from France, Portugal, Germany and ESO. The team make up the GRAVITY collaboration, named after the instrument they developed for the VLT Interferometer, which combines the light of all four 8m VLT telescopes into a super-telescope (with a resolution equivalent to that of a telescope 130m in diameter).

The same team reported in 2018 another effect predicted by General Relativity: they saw the light received from S2 being stretched to longer wavelengths as the star passed close to Sagittarius A*. “Our previous result has shown that the light emitted from the star experiences General Relativity. Now we have shown that the star itself senses the effects of General Relativity,” said Paulo Garcia, a researcher at Portugal’s Centre for Astrophysics and Gravitation and one of the lead scientists of the GRAVITY project.

Scientists from the European Space Agency (ESA) and the CHaracterising ExOPlanet Satellite – CHEOPS mission have announced the successful completion of extensive testing of the CHEOPS instrument and detector. The CHEOPS mission payload is based around a single frame transfer backside-illuminated charge-coupled device (CCD), supplied by Teledyne e2v, which is located in the focal plane of a 32cm diameter on-axis telescope.

The device selected for the CHEOPS mission was done so in part based on proven heritage and reliability in space. Teledyne says that the CCD47-20 image sensor "is possibly the most used image sensor for space imaging missions, to date.”

Carlos Corral van Damme, ESA’s System Principal Engineer for CHEOPS, commented: “The pointing is extremely stable: this means that while the telescope observes a star for hours while the spacecraft moves along its orbit, the image of the star remains always within the same group of pixels in the detector.” 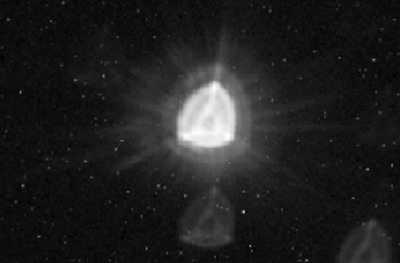 ESA’s CHEOPS mission lifted off on the 18th December 2019, heading for a low earth orbit (LEO), on the 8th January the science instrument containing the focal plane was successfully activated, followed by the opening of the telescope cover a few weeks later. Then, on the 7th February 2020, the first image was acquired using the CCD47-20 detector. As of April 16, 2020, ESA confirmed that routine science operations would commence by the end of April.

The first image collected (right), referred to as a “perfect blur”, was of a target star located around 150 light-years away. The intentionally blurry image is a product of the specially designed telescope optics, which are deliberately defocused to maximise the precision of CHEOPS’ measurements.

CHEOPS will now carry this unprecedented study by measuring and characterizing the exact size of exoplanets (planets in other solar systems) to determine their bulk density.

Dr Paul Jerram, Chief Engineer at Teledyne e2v said, “We are delighted to be involved in another mission to discover and characterize exoplanets. Space missions have detected the large majority of exoplanets discovered so far and ground-based telescopes using our CCDs, especially Kepler, and CHEOPS will follow up on those discoveries.

“Our knowledge of exoplanets will dramatically increase in the future when new instruments, for which we are currently making detectors for, are launched, more specifically, PLATO which will focus on detecting earth-like exoplanets and the WFIRST coronagraph which will directly image exoplanets.”

In summer 2018, ESA joined with the musician Vangelis and the family of scientist Prof. Stephen Hawking to beam a message marking his passing to the nearest black hole. On 22 April 2020, Earth Day, the ESA is transmitting this poignant message to all of planet Earth - as a message of hope, to say that, by working together, we can overcome this crisis and others facing humankind. The message is contained in the following video: