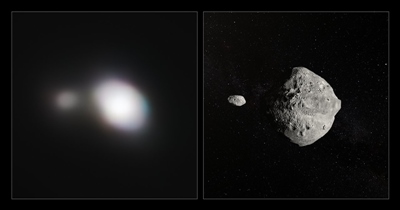 An adaptive optics instrument normally used to search for and characterize exoplanets has obtained the sharpest images yet of a double asteroid, as it hurtled past Earth in late May.

The Spectro-Polarimetric High-contrast Exoplanet Research (SPHERE) tool - part of the Very Large Telescope (VLT) installation at the Paranal Observatory in Chile - tracked the near-Earth asteroid, known as 1999 KW4, as it passed within 5.2 million kilometers of Earth on May 25.

And while the captured image is undeniably blurry, astronomers say that the resolution quality is the equivalent of imaging an individual building in New York, from a vantage point in Paris.

Imaging challenges
Although it is not classed as a threat to Earth, the 1.3 kilometer-diameter double asteroid’s close-ish encounter presented the European Southern Observatory (ESO) with an opportunity to test potential responses to greater hazards that may emerge in the future.

That could include attempts to deflect near-Earth objects that present more of a threat. One example is another binary asteroid system named Didymos - the Greek word for “twin”.

It won’t pass particularly close to Earth for another hundred years or so, but is the subject of NASA’s “DART” spacecraft mission, which will represent the first attempt by humans to deflect the course of an asteroid - by crashing an object into one.

ESO says that the kind of data collected with the latest SPHERE observations would be essential in the event that an asteroid is discovered to be on a collision course with Earth, for example by helping to predict how it might impact the atmosphere and surface.

The instrument is said to be one of only a few worldwide that is capable of resolving the two rocky elements that make up the KW4 asteroid. They are separated by 2.6 km, but with KW4 estimated to have been traveling at around 70,000 km/hour as it passed Earth, it presented a major challenge - even for state-of-the-art adaptive optics equipment.

Mathias Jones, an astronomer at VLT who was involved in the recent effort, said in an ESO release: “During the observations the atmospheric conditions were a bit unstable. In addition, the asteroid was relatively faint and moving very fast in the sky, making these observations particularly challenging, and causing the AO system to crash several times. It was great to see our hard work pay off despite the difficulties!”

Infrared imaging
Comprising three individual subsystems – two cameras and a spectrograph – SPHERE is a complex piece of optical equipment operating across the red and near-infrared spectrum. It has been operational since May 2014, mostly helping astronomers to identify and study exoplanets.

Using a coronagraph to block out light from the star being orbited by an exoplanet, SPHERE has previously revealed protoplanetary discs, the early stages of nebula formation, and the first confirmed direct image of a “newborn” exoplanet.

Its imaging mode works on the principle that although a central star emits unpolarized light, the light that is then scattered by the dusty disc surrounding it is partially polarized. That polarization differential can be exploited to isolate light from the star and light from objects around it, yielding a sharp view of the disc or planet itself.

A camera sensitive to the 600-900 nm spectral region detects the reflected polarized light of gaseous planets orbiting close to their host stars, while a second camera captures 900-2300 nm infrared light to image young giant planets directly. SPHERE’s spectrograph is then able to analyze the infrared signature to characterize the atmosphere of the exoplanet.