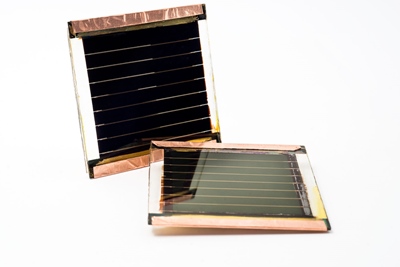 Developers at the Belgian electronics research center IMEC say that their latest 16 cm2 device operates at 12.4 per cent, while the Swiss “CHEOPS” project leaders claim to have reached a similar figure with a slightly larger demonstrator module.

Module stability
IMEC, which has been developing the technology as part of the Solliance project alongside industrial partners including DyeSol, Solartek and Panasonic, says that the certified 12.4 per cent figure ranks among the highest for this particular module size, and that the prototype has shown “exceptional” stability in lifetime tests.

The module efficiency was measured under long-term maximum power point (MPP) tracking, with IMEC adding: “At Solliance, this perovskite technology is developed with industrially applicable processes and with a view towards a rapid market introduction of this promising source of renewable energy.”

While perovskite PV cells are not particularly efficient solar converters on their own, it is hoped that adding them to existing silicon cells in a tandem formation will dramatically increase overall conversion efficiency at a relatively small additional manufacturing cost.

Alternatively, the new technology could be used in thin, lightweight, semi-transparent modules that could be integrated in buildings as windows or curved construction elements – although much larger modules with similarly high efficiencies must first be demonstrated.

Around a year ago, the Solliance partnership said that it had produced larger prototype modules (with an area of 168 cm2) with a conversion efficiency of 10 per cent, based on 24 interconnected cells.

‘Aggressive’ roadmap
In the current design, eight cells are connected in series, using a low-loss interconnection technology based on laser and mechanical patterning. “Due to this optimization, about 90 per cent of the designated illumination area of 16 cm2 is contributing to the energy generation,” reports the lab, adding that the MPP was tracked for more than ten minutes during certification tests performed by the Fraunhofer Institute for Solar Energy Systems (ISE) in Freiburg.

Solliance program manager Tom Aernouts said of the work: “This breakthrough achievement confirms that we are able to steadily improve the conversion efficiency of perovskite solar modules.

“In a few years, we have made rapid progress not only on conversion efficiencies for single cells but are now also consolidating this at module level for this type of thin-film photovoltaics.”

For the future, Aernouts says that the Solliance team has set an aggressive roadmap for larger-area, low-cost processing and long-term stability that promises to advance the technology beyond the laboratory.

As recently as last month, the Solliance consortium announced that it had made 12.6 per cent-efficient perovskite cells using a roll-to-roll production approach that should be well suited to low-cost volume production.

CHEOPS update
Meanwhile the CHEOPS partnership, which is co-ordinated by the Centre Suisse d’Electronique et de Microtechnique (CSEM) and features perovskite expertise from the University of Oxford among 12 industrial and academic partners, says that its 25 cm2 area modules have also demonstrated power conversion efficiency of more than 12 per cent.

In the latest update posted on the project web site, the CHEOPS team says that it has developed a low-temperature (less than 200°C) fabrication process.

“This is key for the fabrication of perovskite/silicon heterojunction tandem cells, since the perovskite top cell is directly processed onto the bottom cell and temperatures above 200°C would deteriorate the performance of these high-efficiency bottom cells,” explain the researchers.

The perovskite top cell is able to absorb ultraviolet and visible light, but transmits near-infrared solar radiation that is then captured by the silicon base. With further optimization, the CHEOPS team believes that it will be able to make a small (4 cm2) tandem cell with an efficiency of close to 30 per cent – way beyond that of today's best commercially available monocrystalline cells.

According to the project timeline, a 100 cm2 perovskite module with an initial conversion efficiency of 15 per cent can be expected by this time next year, alongside a small (1 cm2) tandem cell operating at 26 per cent efficiency.

And by early 2019 the targets include a 15 cm x 15 cm perovskite module with 14 per cent efficiency, plus a semi-transparent tandem mini-module measuring 20 cm by 30 cm – closer to the much larger module sizes that would be necessary for commercial deployment.