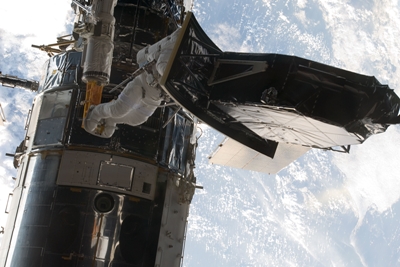 NASA remains hopeful that the malfunctioning camera on board the Hubble Space Telescope can be returned to operations, with a team of engineers currently working to understand exactly what has gone wrong.

On January 8, software installed on the Wide Field Camera 3 (WFC3) - whose two sensor channels cover the spectral range from 200 nm in the ultraviolet to 1700 nm in the infrared - detected voltage levels outside of the instrument’s predefined range. As a normal safety precaution, the camera autonomously suspended its operations.

“A team of instrument system engineers, WFC3 instrument developers, and other experts formed and quickly began collecting all available telemetry and onboard memory information to determine the sequence of events that caused the values to go out of limits,” NASA announced January 11.

“This team is currently working to identify the root cause and then to construct a recovery plan. If a significant hardware failure is identified, redundant electronics built into the instrument will be used to recover and return it to operations.”

UV, IR sensitivity
WFC3 is Hubble’s main imaging system, and was installed during the telescope’s final servicing mission in 2009. It is based around two light sensors, and augments the Advanced Camera for Surveys (AFC) imager - designed primarily for wide-field imagery at visible wavelengths - with additional sensitivity in the UV and near-IR spectral regions.

The IR channel uses a 1024 x 1024 pixel HgCdTe detector developed by US firm Teledyne Technologies, of which e2v is now a subsidiary. Sensitive across 800-1700 nm range, it was originally developed by Teledyne specifically for the WFC3 program.

The long-wavelength cut-off was deliberately set at 1700 nm rather than a longer wavelength, so that the detector could be cooled with simpler and cheaper thermoelectric devices, rather than requiring cryogenic or mechanical cooling.

US government shutdown
NASA stresses that, aside from the WFC3 issue, Hubble continues to carry out observations with its three other instruments. The ACS, the Cosmic Origins Spectrograph and the Space Telescope Imaging Spectrograph are all said to be functioning normally.

Because of the Space Shuttle’s retirement, problems on Hubble can no longer be fixed by astronauts in orbit, but the space agency also pointed out that the 2009 and final servicing mission was only expected to extend the telescope’s lifetime by an additional five years.

It has now delivered more than nine years of science observations, helping to bridge the gap between Hubble and the much-delayed James Webb Space Telescope, which is now scheduled for launch in 2021.

NASA also says that the current political impasse in the US should have no impact on efforts to diagnose and fix WFC3.

“Hubble operations, like other satellite operations, are excepted activities as defined in the NASA furlough/shutdown plan,” it explained. “The current partial government shutdown is therefore not expected to have an impact on the recovery of the instrument to normal operations.”