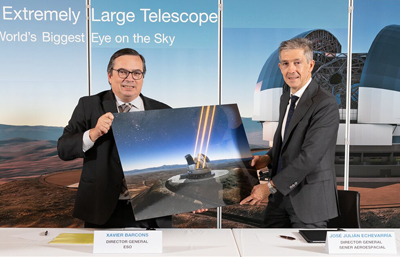 The European Southern Observatory (ESO) has signed a contract with SENER Aerospacial for the design and production of the support cell for the M5 mirror of the Extremely Large Telescope (ELT).

SENER Aeroespacial will carry out the design, construction and verification of the cell for the M5 mirror, as well as its control system and auxiliary equipment. This complex mechanism has critical performances in terms of accuracy to ensure the stability of the flat elliptical mirror M5.

The contract was signed on 29 November 2019 at ESO’s headquarters in Garching bei München in Germany by ESO’s Director General Xavier Barcons and the General Director of SENER Aeroespacial José Julián Echevarría.

The ceremony was also attended by the Vice-Consul of Spain in Munich María Gonzalo Villanueva, representatives from the Spanish Centre for the Development of Industrial Technology, the Spanish Ministry of Science, Innovation and Universities, as well as by staff members of ESO and SENER Aeroespacial. 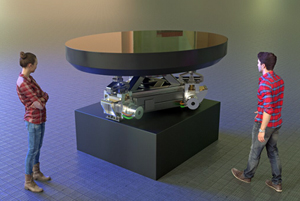 On reflection: M5 mirror and support for the ELT.

With a primary mirror of 39 meter diameter, the ELT will be equipped with five mirrors in total. Two of them–M4 and M5–form part of the adaptive optics system of the telescope. Their unique synergy will allow the ELT to take extremely high-quality and sharp images.

Although the M5 mirror will be the smallest mirror on the telescope (2.7m by 2.2m), it will be the largest tip-tilt stabilised mirror in the world. The M5 cell includes a fast tip-tilt system for image stabilisation that will compensate perturbations caused by the telescope mechanisms, wind vibrations, and atmospheric turbulence.

The ELT, which was approved for construction in 2014 by the ESO Council, is currently under construction on Cerro Armazones in the Chilean Atacama desert.

The telescope will reside very close to ESO’s Paranal Observatory where ESO’s current flagship telescope the Very Large Telescope (VLT) is located. First light of the ELT is scheduled to take place in 2025. Once built it will be humanity's biggest eye on the sky.