The largest telescope in the world – an array of giant radio antennae – incorporates a master clock based around a 1556nm laser system. 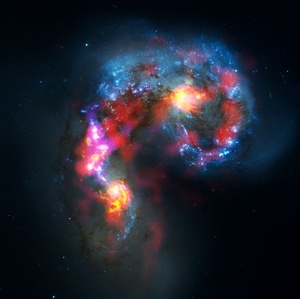 A high-precision fiber laser system developed by NKT Photonics and TeraXion is at the heart of a major new astronomical observatory that has just started operations – the Atacama Large Millimeter/Sub-millimeter Array (ALMA) telescope in northern Chile.

The giant radio telescope, under construction since 2003, currently comprises an array of 20 twelve-meter parabolic antennae, built at an altitude of 5000 m in one of the driest places on Earth. The European Southern Observatory (ESO) has just released the very first images recorded by the array – a collision of two galaxies that has also been imaged in the visible domain by the Hubble Space Telescope (see image, right).

The Alma telescope builds up images by linking the response from each antenna into an interferometer array. The reason for this stems from the intrinsically low resolution of radio astronomy, which is a direct result of the long wavelengths being observed. Building a very large dish improves this resolving power, but to provide an image comparable with the best ground-based optical telescopes a radio telescope would need to be several kilometres in diameter.

That clearly isn’t practical, but signals from the array of antennae can be combined by an interferometer in a way that mimics a single telescope – and the larger the separation between the antennae, the better the image resolution becomes.

One of the key components that features in the interferometer is a master clock, which enables an accurate measurement of the phase of signals received at each of the antennae by providing a highly stable reference signal. The antennae in position so far are relatively close to each other, spaced about 125 m apart. But when the full 66-antenna array is in place, their furthest separation will be 16 km. 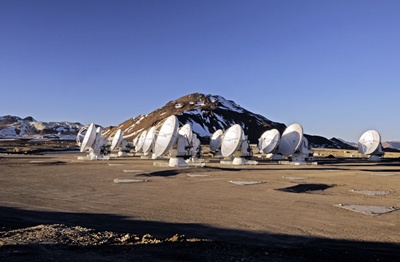 Boostik laser
The 1556 nm laser system that is central to the interferometer is based around a Boostik fiber laser provided by the Koheras division of Denmark-based NKT Photonics, and has been developed in collaboration with Canada’s TeraXion for the Alma application. TeraXion specializes in laser frequency stabilization, which is essential for the Alma interferometer’s clock. The 1556 nm wavelength locks with a spectroscopic transition in a rubidium gas cell to provide the high-precision timing required.

Koheras’ sales manager Soren Lovgreen said of the joint effort: “We have had a long and constructive collaboration with TeraXion, and are proud to contribute with a crucial component for the very demanding telescope application – which can really benefit from our unique combination of low phase noise and extreme coherence length.”

According to NKT, the BoostiK fiber laser needed no particular adjustment for use in the Atacama conditions, having already been developed for use in harsh environments. Indeed, the laser has already passed one tough test – a magnitude 6.5 earthquake that struck the region in June this year. The module is also designed with an insulating carbon housing to increase the temperature range within which the laser can operate.

TeaXion is more usually associated with optical communications, for which it provides high-end components such as tunable dispersion compensators for high-speed networks. But the company also operates in the industrial laser and defense and aerospace sectors, for example supplying fiber Bragg grating (FBG) reflectors that may be used in future high-power laser weapons.

Market pull
NKT says that it is seeing market pull for fiber lasers from a variety of optical sensor applications, most significantly from the oil and gas industry, as well as structural health monitoring, security, LIDAR and high-end science:

“We see an increasing demand in atomic physics, where we are now launching new high-power BoostiK solutions with output up to 15 W - still single-frequency and ultra-low noise,” the company’s global product line manager Kim Hansen told optics.org. “The attractive parameters of our lasers, common for all these applications, are very high reliability and ultra-low phase noise.” 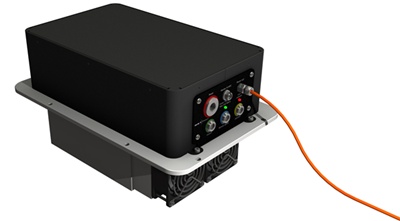 Meanwhile, astronomers working with the ALMA telescope will be able to search the coldest, darkest and most distant parts of the universe using their new tool. Its first pictures of the colliding galaxies were produced using only twelve of the antennae in concert.

As the observatory grows, the sharpness, efficiency, and quality of its observations will increase dramatically as more antennae become available and the array grows in size, said the ALMA team as they unveiled the dramatic images.

One of the first jobs for ALMA will be to observe swirling disks of gas and dust around young stars, in a bid to find planets as they are forming, and to yield insights into the early formation of the Earth.