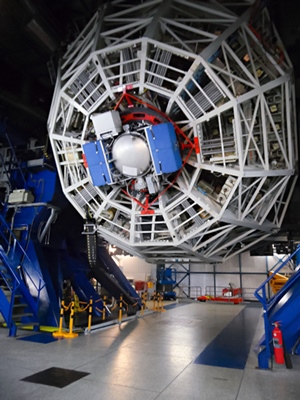 A $4 million coronagraph instrument recently installed on the Very Large Telescope (VLT) in Chile has begun a search for Earth-like exoplanets around nearby stars, following “first light” achieved last month.

The collaborative effort by the European Southern Observatory (ESO) and the privately funded Breakthrough Initiatives organization began an initial ten-day observation run on May 23. The team is using the new equipment to look for planets orbiting in the so-called “habitable zone” around two Sun-like stars in the Alpha Centauri star system.

At just over four light-years away, Alpha Centauri represents the cosmic next-door neighbor of our own solar system.

Technical challenge
Called “Near Earths in the AlphaCen Region” (NEAR), the thermal infrared coronagraph built by the team combines the adaptive optics capability of the VLT’s Unit Telescope 4 with an upgrade to the existing VISIR (VLT imager and spectrometer for mid-infrared) instrument.

Even though the Alpha Centauri system is nearby in cosmic terms, the colossal distances involved and the very low relative brightness of any rocky planet orbiting either of the two Sun-like stars presents a huge technical challenge for direct imaging. Although thousands of exoplanets have been discovered previously, their presence is normally inferred from a periodic dip in the brightness of the host star, rather than directly imaged.

ESO says that the starlight reflecting off any such planet would be billions of times dimmer than that from its host star, while the proximity of the planet to the star required to support the existence of liquid water demands extraordinary resolving power – equivalent to imaging a moth flying around a street lamp dozens of miles away.

This is the challenge that the new coronagraph is designed to solve, by searching for thermal signatures similar to that of the Earth.

“NEAR modifies the existing VISIR instrument in three ways, combining several cutting-edge astronomical engineering achievements,” explains ESO. “First, it adapts the instrument for coronagraphy, enabling it to drastically reduce the light of the target star and thereby reveal the signatures of potential terrestrial planets.

“Second, it uses adaptive optics to strategically deform the telescope’s secondary mirror, compensating for the blur produced by the Earth’s atmosphere. Third, it employs novel chopping strategies that also reduce noise, as well as potentially allowing the instrument to switch rapidly between target stars - as fast as every 100 milliseconds - maximizing the available telescope time.”

Speculative effort
Whether or not any such signatures will be detected remains to be seen. Back in 2016 another team using a different, smaller ESO telescope concluded that a roughly Earth-sized exoplanet they called “Proxima b” was orbiting Proxima Centauri - a red dwarf star in the Alpha Centauri system – and might reside in the habitable zone.

However, the chance of spotting another planet orbiting the more Sun-like stars in the system, called Alpha Centauri A and B, at exactly the right distance is regarded as only around 10-20 per cent, with a large degree of uncertainty.

The speculative nature of the project means that it was never likely to find funding via the usual scientific channels, and that is where the Breakthrough Initiative stepped in. Its founder, the billionaire tech entrepreneur Yuri Milner, has backed a series of projects to search for habitable exoplanets and extra-terrestrial life.

This particular effort is known as “Breakthrough Watch”. Its funding supported development of new hardware by the Munich, Germany, company Kampf Telescope Optics (KTO), while the thermal coronagraph was developed jointly by University of Liège in Belgium and Sweden’s Uppsala University. Although it uses the VLT's deformable mirror to correct for atmospheric distortions, NEAR does not employ the observatory's yellow laser guide stars - instead using light from the host star.

Olivier Guyon, lead scientist for Breakthrough Watch, remarked: “NEAR is the first and (currently) only project that could directly image a habitable exoplanet. It marks an important milestone. Fingers crossed - we are hoping a large habitable planet is orbiting Alpha Cen A or B” commented.”

‘Pathfinder’ for ELT
Even if it turns out that there are no such planets, the work should prove useful for future direct imaging of exoplanets, in particular with the new generation of much larger segmented telescopes that are expected to progress to “first light” in the mid-2020s.

Markus Kasper, ESO’s lead scientist for NEAR, said: “This is a valuable opportunity, as - in addition to its own science goals - the NEAR experiment is also a pathfinder for future planet-hunting instruments for the upcoming Extremely Large Telescope (ELT).”

Along with the Giant Magellan Telescope, Thirty Meter Telescope, and James Webb Space Telescope, the ELT will have sufficient resolving power to image exoplanets directly, while new spectroscopic instruments under development will also be able to spot the presence of tell-tale gases like oxygen and water vapor that may indicate extra-terrestrial life.

Milner summed up the current effort, saying: “Human beings are natural explorers. It is time we found out what lies beyond the next valley. This telescope will let us gaze across.”

• Data from the NEAR experiment will be publicly available from the ESO archive, under program ID 2102.C-5011. A pre-processed and condensed package of all the data will be made available shortly after the campaign concludes.

In addition, the Python-based high-contrast imaging data reduction tool PynPoint has been adapted to process NEAR data, and will be provided to members of the astronomical community who would like to use the data but do not have their own data reduction tools. See this web site for details.