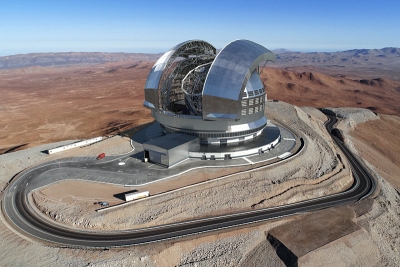 Construction of what will eventually become the world’s “biggest eye on the sky” is in a difficult period, but still making excellent progress.

That was the message from Roberto Tamai, program manager for the European Southern Observatory’s Extremely Large Telescope (ELT), in his presentation at this week’s SPIE Astronomical Telescopes and Instrumentation Digital Forum.

Tamai said that the combination of the Covid-19 pandemic and social unrest in Chile, where the ELT is being built, meant that “first light” was now pencilled in for November 2026. Prior to the latest disruption, that had been expected a year earlier.

€127M budget boost
The biennial SPIE event, which had been due to take place in person in Yokohama earlier this year, brings together much of the world’s expertise in telescope development and construction.

Among the highlights at the event this time around are updates on the largest telescope construction projects currently underway, including the Vera C. Rubin Telescope, Giant Magellan Telescope, and the Thirty Meter Telescope (TMT), alongside ELT.

With its 798-segment primary mirror, set to measure a colossal 39 meters in diameter, ELT represents the single largest of those projects in terms of its collection optics, and is expected to generate imagery way beyond what is currently possible with either terrestrial or space observatories.

Tamai said that ELT operations would be helped by the additional €127 million recently approved for the observatory’s budget by the ESO Council.

Earlier this month, ESO said that the increase - representing an overall rise of 10 per cent and bringing the total cost of the project to €1.3 billion - included the procurement of components originally deferred to the second phase of the project.

A rough sea
Likening the giant project’s current challenges to that of “a boat heaving on a rough sea”, Tamai outlined setbacks including a key contractor becoming insolvent, social unrest in Chile last year, and inevitably the impact of the Covid-19 pandemic and travel restrictions on site activities, inspections, and interaction between the hundreds of contractors and sub-contractors working on ELT.

At the Armazones summit site, ELT’s foundations were being built when the pandemic arrived in Chile and work halted as a result. Tamai said that it was still not certain when that work would continue, but that a restart in early 2021 did look possible.

On the plus side, Schott has been able to continue production of the mirror segment blanks that make up ELT’s huge primary optical element, with the first of those segments delivered in July 2020. After being cast at Schott, the blanks are sent to Safran-Reosc in France for polishing.

Adaptive optics progress
Among the other major elements that make up the telescope’s optical design, assembly and integration of the 2.4 meter-diameter “M4” adaptive optical unit is underway at AdOptica in Spain. This highly complex mirror, fabricated from silicon carbide, will use 5300 actuators to help correct for turbulence in the Earth’s atmosphere.

Other recent developments include completion of the ELT Technical Facility near the summit site earlier this year, while Tamai also noted that the first four lasers from Toptica that will be used to generate ELT’s guide stars have passed factory acceptance tests.

Wrapping up the overview, Tamai said that the schedule for ELT’s completion remained unclear, especially with regard to the situation at the Armazones site, while a large number of delays to intermediate milestones had materialized at the contractor level.

“The program schedule can only be released after Armazones is re-opened,” he concluded. “These are difficult times, but we very much believe we are maintaining the objective of constructing the world’s biggest eye on the sky - and there is still excellent progress and team cohesion, adapted to Covid.”

• The SPIE Astronomical Telescopes and Instrumentation Digital Forum includes a number of other presentations detailing progress on ELT's optical subsystems and components. For further information, check out conference sessions 15-18 here.