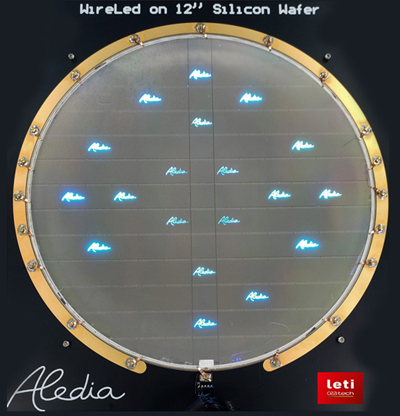 Aledia's microLED chips on 300mm silicon wafers are said to be world’s first.

The company, which has been developing its technology on 200mm (8in) silicon wafers over the past eight years, will produce the chips on both 200mm and 300mm wafers.

Aledia says that the larger wafers provide better economic payoff and cost-effective integration with smaller-node electronics, which are only available on 300mm silicon wafers. In 2012, the company was spun out of French research institute CEA-Leti, which develops micro- and nanotechnologies. The work on 300mm wafers has been performed by joint Aledia and CEA-Leti teams.

“The larger size allows 60-100 smartphone displays to be made on a single 300mm wafer, versus approximately four to six using the present LED industry-standard, 4in sapphire substrate. With Aledia’s nanowire LED technology, a 3D LED, this can be done with commercially available processes and equipment, since it uses 780µm standard-thickness silicon wafers.”

Traditional planar, 2-dimensional microLEDs are produced by depositing flat layers of gallium-nitride (GaN) crystal on sapphire wafers of 100-150mm diameter (4-6in), with the majority of production today being on 100mm (4in) wafers.

Aledia’s microLED technology grows GaN nanowires (GaN crystals of sub-micron diameter) on top of large-area silicon (called “3D”). This 3D nanowire technology does not create any of the stresses observed on 2D chips, which build up as the wafer size is increased, and so allows the use of very large-size wafers.

In addition, this silicon-based technology allows production in conventional microelectronics fabs, called silicon foundries, which can be ramped up to high volume production with extremely high yield.

“We are pleased to have helped Aledia push forward the state of the art of 3D LED manufacturing using our 300mm silicon processing line,” said Emmanuel Sabonnadière, CEO of CEA-Leti. “3D nanowire micro-LEDs have the potential to make serious penetration into large display markets. CEA-Leti is active today in supporting the display industry’s transition to micro-LED technology.”

Anania added, “We believe the use of large-area silicon wafers and microelectronics foundries is the only way to deliver the huge volumes demanded by end-user markets. For example, if only the large-screen TVs of 60 inch diagonal and larger transitioned to silicon nanowire technology to obtain better image quality and lower manufacturing costs, this would require 24 million 300mm wafers per year.

“Such volumes can only be delivered by the silicon industry and supply chains. Smartphones, laptops and tablets would be on top of that.”