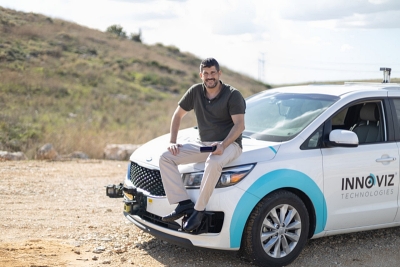 The cash is set to be released via a reverse merger followed by a listing on the Nasdaq exchange, a method that has already proved successful for fellow lidar firms Velodyne and Luminar Technologies in recent months.

Following the transaction with investors Perception Capital Partners and Antara Capital, anticipated to complete in the first quarter of next year, Innoviz is set to list under the ticker symbol “INVZ” and despite tiny revenues is expecting to have a valuation in the region of $1.4 billion.

Cash cover
According to an investor presentation hosted by Innoviz and Perception Capital last week, the idea is to combine $150 million already held in trust by the Nasdaq-listed investment vehicle Collective Growth Corporation with $200 million raised from backers by Antara.

Once the merger is completed, Innoviz should have close to $370 million in cash on its balance sheet - which the firm says will be enough to cover its cash flow requirements until it becomes cash-generating of its own accord.

Speaking during the presentation, Innoviz CEO Omer Keilaf said that since he co-founded the company in 2016 with other members of the IDF’s “Intelligence Force” division, it had raised $251 million dollars.

Keilaf added that the top-tier automotive parts firm Magna International was a key supporter, both in terms of investment and industry cooperation, and crucial to the firm’s selection by BMW to provide lidar units for production vehicles. Other key partners include China’s HiRain and Samsung Harman in Korea.

“We [now] have about 280 employees, most of them in Israel, but we have a presence in Germany, US, and China,” Keilaf told the investor conference, also highlighting the recent release of the firm’s “InnovizTwo” product, which is said to cost significantly less than its predecessor.

Automation priorities
Innoviz has also signed a deal with the car parts giant Delphi, and has a contract manufacturing partnership with NYSE-listed Jabil.

“Our technology was built from the ground up in order to bring the best technology at the right price point and the right reliability,” the CEO added. “For that, we developed three different technologies altogether, combined with a lot of optics and software.”

Those innovations include custom-designed MEMS and detector components, alongside a mixed-signal ASIC and a software layer that is able to identify pedestrians and classify different types of vehicles.

Outlining the differing priorities at different levels of driving automation, Keilaf said that the cost of a lidar for “Level 2” autonomy (used for driver assistance systems already available today) needed to be below $500.

“In this space, our competition is very low-end lidars with very low resolution,” he explained. “InnovizTwo, which is targeting a very low cost, provides a path not only to allow very good and safe L2+ platforms, but also a path for the carmaker to develop on top of it, the software that eventually reaches Level 3.”

Commercial traction
Another of the Innoviz co-founders, “chief business officer” Oren Rosenzweig, says that the company has also made inroads into trucks and beyond the automotive sector.

“We have partnered with Shaanxi, one of the leading truck companies in China, earlier this year, and [others], and our lidars are also used by many of the companies developing delivery robots and autonomous drones,” he said.

“We’re also working with a variety of heavy machinery companies for mining applications, construction, and agriculture.”

“What we see here is a very big upside,” he told investors. “An award such as BMW at a standard 15 per cent take rate at the peak year of the program would represent more than $700 million in bookings, and $220 million in revenue in 2025.”

Although company revenues in 2020 will be only around $5 million, that figure is expected to ramp up significantly from 2023. Innoviz is projecting total sales approaching $500 million by the middle of the decade - by which time it expects to become cash-flow positive.